Whether you are a supporter or a skeptic of TEXIT, there’s no doubt that you’re wondering how a border between independent Texas and the rest of the United States will work.

Some say that it will be complicated and difficult to manage, while fewer say that it simply wouldn’t be feasible. However, if you want to see exactly how easy it would be, all you have to do is look to the north.

Right above the U.S. is Canada, along with the border that keeps the two countries separated. This example alone is enough to show how a border between Texas and the United States could work.

When it comes to maintaining and marking the massively long boundary, the task is left to the bi-national International Boundary Commission. Issues regarding the boundary’s waters are given to the International Joint Commission.

However, the agencies currently responsible for arranging the legal passage between the Canada-United States border are the CBP (U.S Customs and Border Protection) and CBSA (Canada Border Services Agency). While everything is handled in detail on the legal side of things, here are a few little-known facts about the international border that will surprise you.

These are just a few successful examples of how the United States and Canada have handled their joint border over the years.

However, these facts beg us to ask the question: If Canada and the United States can successfully manage a 5,000-mile long border, how hard could it be for Texas to do the same? The answer is simple; it wouldn’t be hard at all.

To get the independence we want, we need to take the first step. Join the movement as we make history and fight for the right to be an independent nation. To show your support for our cause, and join Texans who want to free Texas. 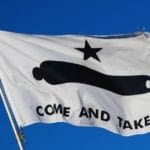 How will Texas handle immigration?