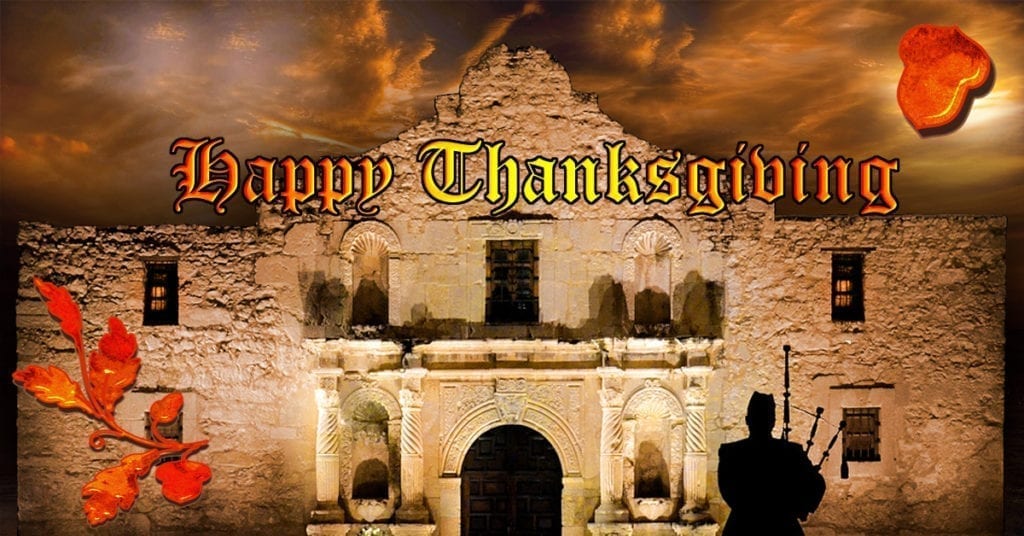 With Thanksgiving happening later this week, those of us at TNM thought we’d pass along one more thing to be thankful for.

You will doubtless recall the ongoing struggle over the Alamo over what narrative will be the definitive one featured after the dust settles on the Reimagine the Alamo project: the Castro family/George P. Bush narrative that portrays the Alamo defenders as just a bunch of ne’er-do-well, racist, interlopers who stole the land from Mexico; or that the victorious dead of the Alamo were heroes, mostly Mexican citizens and multiple ethnicities, who stood together in defiance of the dictator Santa Anna, his illegal suspension of the Mexican constitution, and his attempt to ethnically cleanse Texas. Well, that battle may have just seen a positive turning point.

On the 12th of November of this year, Texas State Senator Bob Hall filed the senate bill SJR 2, which proposes:

… a constitutional amendment requiring legislative approval of the historical narrative for certain exhibits featured at the Alamo or a museum owned or operated by the state.

If passed, the amendment would present a near insurmountable hurdle in the way of political organizations, the GLO, or the City of San Antonio in trying to hijack the narrative for a politically correct agenda.

Additionally, the soon to be re-filed “Monument Protection Act” (formerly SB 112, courtesy of State Senator Brandon Creighton) will offer protection to Texas’ monuments, including the endangered Alamo Cenotaph, from being removed from their current place of honor. If signed into law along with SJR 2 during this imminent legislative session, both will effectively defeat the goals of those currently attempting to steal Texas History. However, there remains one other bill that can additionally help further secure the Alamo for future posterity, and that’s called “The Alamo Preservation Act.”

According to Texas Nationalist Movement President Daniel Miller, the driving force behind the bill, this act would:

… remove the Alamo from under the authority of the General Land Office, place it under Texas Parks and Wildlife, and restore the rightful managers of the Alamo: The Daughters of the Republic of Texas.

With the combined strength of all these bills, plus a possible bill for removing the Alamo from the influence of the U.N. and U.S. federal government, once law, they will protect and preserve the Alamo for the foreseeable future.

The battle to preserve Texas is far from over, and we must keep in mind to tell our senators and representatives to support these bills.  Click on the link below to find out how you can take action to defend the Alamo. However, this is very good news for Texas, something to give us hope in these times, and something for which those that remember the Alamo should be thankful for.