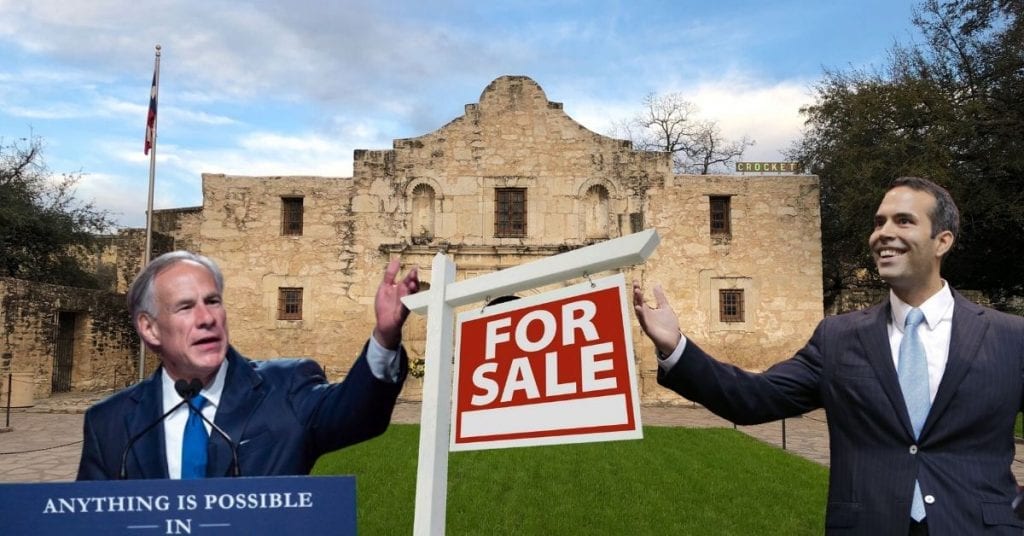 The era of “fake news” has had an unintended consequence. It has created a class of people who shirk responsibility and avoid uncomfortable truths by using the magic words “fake news.” Unfortunately, one of the newest casualties might be the venerated shrine of Texas liberty – the Alamo.

The Texas Nationalist Movement recently released an update on the current status of our fight over the Alamo and included links to a previous update that we released on the same issue. Much like previous statements, TNM supporters have heeded the call and have been rallying to the protection of the Alamo. But there have been accusations of the TNM peddling “fake news” from those who are blissfully unaware of the history of our fight or are showing up late to the battle with nothing but an attitude and a Facebook account.

In plain English, here are undeniable facts about the Alamo issue that have been called into dispute by our critics.

Fact: The Alamo was added to the UN’s World Heritage Site program.

While Texans had their attention diverted to other issues, this happened with little to no public input or notice. The TNM sounded the alarm on this issue repeatedly since we became aware of the push back in 2009. But it happened, with the City of San Antonio and Land Commissioner George P. Bush working in lockstep. Even State Senator Donna Campbell made a last minute attempt to stop it from happening, which failed when she couldn’t answer simple questions about her own bill.

Fact: The UNESCO treaty gives the UN and the Federal Government defacto control over the Alamo.

The United States is a signator to the United Nations treaty and a signator to the creation of UNESCO under that treaty and the World Heritage Convention. Article 5 Section 4 requires signators “to take the appropriate legal, scientific, technical, administrative and financial measures necessary for the identification, protection, conservation, presentation and rehabilitation of this heritage…”

Again, the signator is the United States Federal Government, not the State of Texas. Under the Supreme Court decision in Missouri v. Holland, the Federal Government can preempt state law in the furtherance of a treaty obligation.

If UNESCO objects to any aspect of the Alamo, including how it’s presented to the public, it can leverage its role under the convention with the Federal Government who, in turn, can override decisions made by Texans about the Alamo by invoking Federal preemption under Missouri v Holland.

They have done it in the past and they show every sign that they’ll do it again. Take the recent UNESCO votes over Jerusalem. While the facts of the UNESCO’s multiple votes on the issue are not up for discussion here, what is important is the willingness of UNESCO to use their role in cultural affairs to make polarizing political statements and erode the sovereignty of a nation-state.

Fact: UNESCO is already insinuating itself in the Alamo redevelopment project.

In a recent statement by the Texas Nationalist Movement, scans of two letters were included that were obtained through the Texas Public Information Act, that verify this fact. They are asserting their authority under the Convention to be included in discussions and planning for development and expansion of the Alamo through their agents the National Park Service.

Fact: The Texas Legislature allocated $75 million from the Rainy Day Fund to initiate a $450 million program to “Reimagine The Alamo”.

While this plan contains some points that the TNM fought for, including restoring the Alamo complex to its original footprint, the majority of Texans who have studied the plan find it odious. Whether it’s the lack of transparency and clarity in the planning process, the near exclusive use of non-Texas companies in its development and execution, the price tag, the plexiglass walls that will limit access, or the undercurrent of voices who want to change the narrative of the Battle of the Alamo, the objections are loud and unheeded.

While there might be economic benefit to the Alamo being a part of the World Heritage Site program, the price for that benefit is high – exclusive control of our Texas heritage. The power to veto, rubber stamped by the Supreme Court, is the power to control. The undeniable fact is that Texans lost control of the Alamo when the Alamo lost their attention.

We can, however, regain control. Legislation and public action are both viable ways to regain control of the shrine of Texas liberty. What is not acceptable is the cry of “fake news” as an excuse for ignorance and apathy.

Join 427,346 Texans who have registered their support for the TNM.

Join 427,346 Texans who support our work to make Texas an independent nation again.

Join 427,346 Texans who support our work to make Texas an independent nation again.