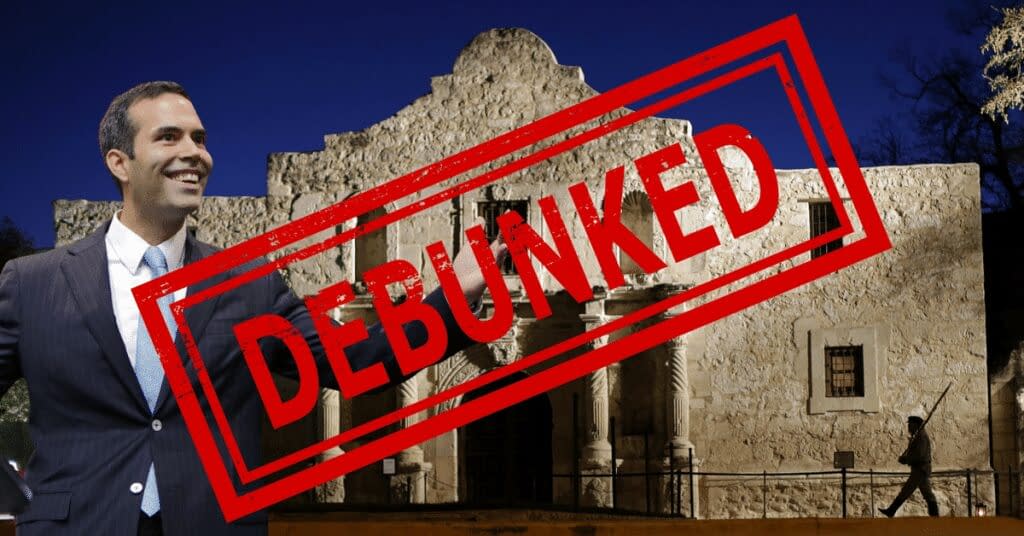 When facing mounting public criticism over his handling of the Alamo, George P. Bush launched a website to combat the criticism. What he didn’t expect was that anyone would check his facts as presented. He was wrong.

The following is a point-by-point rebuttal to Bush’s propaganda, presented by John Griffing, to a group of State Legislators.

Extremes never help in the formation of policy. Both George P. Bush and the Texas General Land Office are guilty of “absolutes” in attempting to deflect intense public criticism over their recent actions related to the Alamo.

In what appears to be a collection of hollow “straw man” arguments, the GLO’s “SaveTheAlamo.com” includes a section titled, “Debunking Myths.” The alleged “myths” are set up like bowling pins, and then knocked down with unsupported contradictions, e.g., “No, that’s absolutely false.”

Lawmakers will be the judge, but there does not seem to be much “debunking,” but there’s a whole lot of “denying.”

A selection of important questions and GLO responses featured on the state-funded website “SaveTheAlamo.com” is provided for lawmakers.

Here is each GLO claim, followed by my rebuttal.

ARE YOU RENAMING THE ALAMO?

Me: The use of “Mission San Antonio de Valero” 8 separate times in the “master plan” is unnecessarily confusing to readers who simply trust their own eyes.

DO THE PLANS DIMINISH THE 1836 BATTLE?

GLO: Absolutely not. The 1836 Battle is central to future plans. It is the event that defines the Alamo’s role in history. It is, by far, the largest exhibit in the new museum and will always be the central story. …

Me: George Skarmeas, the Alamo’s chief planner, paints a different picture. When asked, “Why not restore the Alamo to its 1836 appearance?” the answer from Skarmeas was, “The events of 1836 were just one small chapter in 10,000 years of history.”

(Transcripts of the meeting where these statements took place are in my possession.)

In the master plan’s statement of guiding principles, Texans are told the new Alamo will “embrace the continuum of history to foster understanding and healing.” Some might mistake “healing” as a metaphor for tearing down or censoring history deemed “politically incorrect,” like renaming Columbus Day “Indigenous People’s Day.”

The GLO’s own Bryan Preston reminds us that many Mexican states were rebelling against Santa Anna in 1836, because he had abolished local government.

So, with whom exactly do we need healing?

WHAT ARE THE PLANS FOR THE CENOTAPH?

GLO: The City of San Antonio owns the cenotaph and plans to repair and restore the monument … Discussion is ongoing about where the Cenotaph will be located once restoration work is complete. One idea is to relocate the Cenotaph … to the location of one of the funeral pyres … to properly honor the location where the defenders’ bodies were burned.

Me: Notice the attempt to preemptively shift blame to the San Antonio City Council for any removal or destruction of the treasured Cenotaph, even though Bush approved a plan that proposed its removal? “It actually sits on city property, so ultimately it will be a city decision,” Bush said recently, when asked about the Cenotaph. Bush is using classic political process language, words that soften the ground for future failure by design. Such language is very revealing about Bush’s actual intent.

And at the very least, we can conclude his intentions are not respectful. Recall that the re-imagine zealots are suggesting protecting a deteriorating, fragile, tall, and erect monument by taking it apart and moving it far from its current location.

The GLO might as well let the Mexican government do the renovation.

BUT I HEARD THE ALAMO WOULD BE SURROUNDED BY PLEXIGLASS!

GLO: No. Plexiglass was never proposed and no wall design has been approved in the final Master Plan. Many people have expressed that they prefer no walls, and the structural glass wall concept was very unpopular.

Me: Another “straw man.” By laying out the most extreme iteration of a legitimate concern, and then shooting it down, the GLO projects the illusion of credibility. The operative word here is “final,” since it is dishonest to say plexiglass was not formally proposed, as the second clause of the last sentence indicates. How can a “concept” be unpopular if it wasn’t proposed or planned?

WHERE DID THE STATE AND NATIONAL FLAGS, BATTLE ARTIFACTS, PLAQUES GO?

GLO: They are where they have been for decades. Some items were temporarily moved to allow historic preservation work to be done on the walls. As work is completed, the items have been returned.

Me: At issue is the consistent dynamic described by those who own or protect Alamo battle artifacts in dealing with the Bush Land Office — and it is that dynamic which breeds so much distrust. It usually follows a pattern, beginning with “accidental” removal of priceless history, followed by refusal to cooperate, then only modest concessions after intense public outcry.

When Bush illegally seized 30,000 artifacts and library materials belonging to the Daughters of the Republic of Texas, who previously managed the Alamo site, he was sued and forced to return them.

Similarly, Bush removed from display a priceless cannon used at the Alamo and owned by a prominent Texas family, which was illegal to do, according to contracts with the State of Texas. Official explanations were that it was being stored for eventual showcasing at the future “world-class museum.” Since the “re-imagine” plan is a 7-year-long project, does it make sense to store artifacts that currently enrich the lives of Alamo visitors for future display?

NOTE: The cannon will supposedly be returned after four weeks; it is undergoing cleaning at Texas A&M. Still, the issue is one of legality and removal. The cannon does not belong to the GLO or Texas. It’s on lease by the family in question. Carelessness is certainly the more reasonable conclusion, but it is THIS kind of absent-minded, well-meaning stuff that empowers the narrative of a stealth plan to erase 1836 from the Alamo’s DNA.

Clearly, it is Bush’s unusually frequent removal of battle artifacts that arouses so much suspicion.

WILL BATTLE ARTIFACTS BE CONFINED TO A BASEMENT?

GLO: No. The Master Plan proposes a 100,000+ square foot museum that will be home to hundreds of Alamo artifacts including the spectacular Phil Collins collection featuring David Crockett’s rifle and James Bowie’s knife … The Battle of the Alamo is and will always be the heart of the story… .

Me: While the GLO may have changed its tune, the master plan synopsis from June, 2017, featured a four-level diagram of the space in question, and only one section of the diagram was labeled “museum” — the basement. Every other level featured in the visual aid is purposed for other activities.

The synopsis also featured a timeline for when the museum would be erected: the year 2023.

AREN’T YOU CREATING A “FREE SPEECH ZONE” TO RESTRICT WHERE CITIZENS CAN EXERCISE THEIR FIRST AMENDMENT RIGHTS?

GLO: No. The plan removes the current “free speech zone” from Alamo Plaza — in the heart of the 1836 Battlefield — to an area outside of where the walls once stood, further restoring dignity and reverence to this sacred ground.

Me: “No” clearly means “yes” in the given context. The sentence right after the adamant, “No,” says the zone is merely moved outside the plaza, and that’s even worse. A plaza is a space traditionally designed to host public expression. Holding it outside a wall is something done in oppressive dictatorships — not Texas.

DOES THE UNITED NATIONS HAVE ANY ROLE IN THE MANAGEMENT OF THE ALAMO?

GLO: No! Not now, not ever. The Alamo, along with four other Spanish-era missions in San Antonio, was designated a UNESCO World Heritage site in 2015. The effort to earn the designation spanned nine years, and was approved and supported by former Texas Land Commissioner Jerry Patterson … The UNESCO designation has nothing to do with management of the Alamo.

Me: Who is the GLO speaking to, here? Some of those who oppose UNESCO’s World Heritage designation may be paranoid, but other logical reasons exist to oppose participation.

WHO MANAGES THE ALAMO? WHAT ABOUT TRANSPARENCY?

GLO: The GLO is a leader in abiding by all applicable laws concerning government transparency. All of the Alamo planning and preservation contracts have been with the GLO, and are posted on the agency’s website. The Alamo Endowment Board … operates as a private 501(c)(3) and posts its financial records with GuideStar.com (https://www.guidestar.org/prole/36-4765844).

GuideStar rates the Alamo Endowment Board as “Transparent.” Anyone can download GuideStar’s report at any time.

Me: I went to GuideStar to download the report spoken​ of, and it turns out, only by spending $167 can the average person see anything even remotely useful.

And Guidestar isn’t really the answer either, since nonprofits don’t have to show how they spent the money, that is, itemized expenditures. Possible corruption — like selling seats on the Endowment​ board — all are hidden from public view under current arrangements.

More disturbingly, since Bush heads both the GLO and the Alamo Endowment, he is basically awarding himself contracts — legally problematic, to say the least.

All available evidence appears to validate the concerns of critics, and despite plentiful denials and contradictions, GLO responses to public concerns are inadequate to satisfy the demands of coherent argument.

Statements like, “No! Not now, not ever!” certainly would not pass muster in a courtroom (unless it was a rerun of “Perry Mason.”)

For all its hype, “Reimagine the Alamo” is a solution in search of a problem.

Now, more than ever, Texans need to make their voices heard on the management of the Alamo. Speak now or forever lose a piece of your heritage.