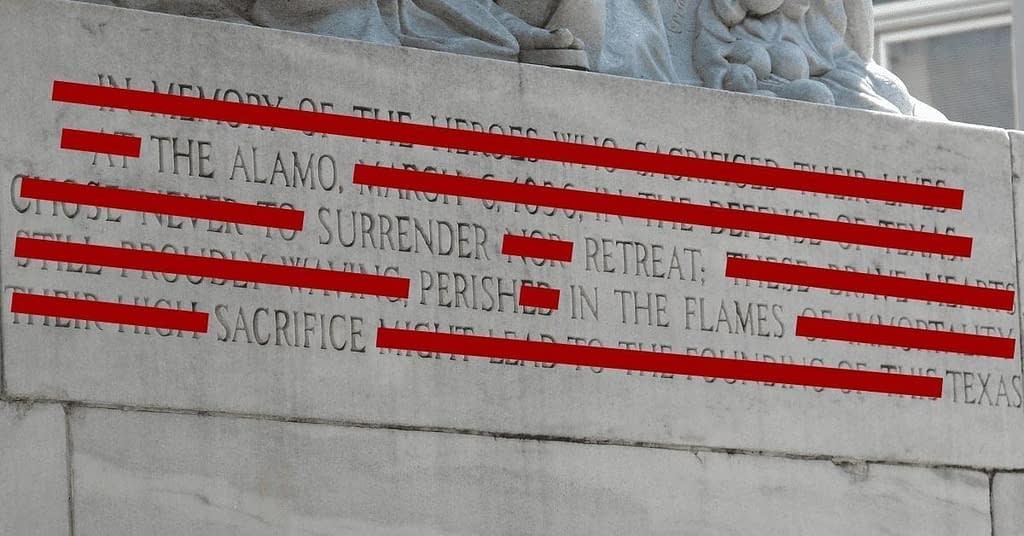 Senate Bill 226, dubbed the Texas Historical Protection Act, introduced by Senator Pat Fallon fails to protect the Alamo Cenotaph. In fact, it actually gives an official seal of approval to the City of San Antonio and the General Land Office to carry out their long-standing plan to remove it.

TNM President Daniel Miller is warning Texans to pay close attention to the details of SB226, “Although SB226 moves Texas, generally, in the right direction in the protection of our historical monuments by giving Texans a greater voice in their disposition, it is fundamentally flawed.”

The bill amends the Local Government Code to add voter approval in cities and counties for the removal, relocation, or alteration of historical monuments. While it requires them to hold a referendum for any of these instances, it also allows them to hold it as a special election instead of a regularly held election.

“We’ve seen how low voter turnout is for special elections such as these which favors the people pushing to remove monuments,” warns Miller. “Think of how municipalities handle bond elections and understand that it can happen the same way for historical monuments.”

Even with this language requiring a vote by the people, there is one major exception that seems directly aimed at the Alamo Cenotaph. It lies in the words “(e)xcept as provided in Section 338.003” that says:

This section is a major loophole that allows for permanent removal of a monument without voter approval. It also offers no definition of “prominent location” leaving it up to the discretion of local bureaucrats to determine what constitutes the prominence of a location. Additionally, there is no defined time limit as to when a monument should be relocated.

The implications of this section on the Alamo Cenotaph are grave. It would allow the City of San Antonio to invoke the 338.003 exception to carry out their planned removal of the Cenotaph under the “Reimagine The Alamo” plan without voter approval, delay its restoration for as long as they’d like, and then, if forced, place it wherever they decide. All of this would be without voter approval and under the cover of statute allowing them to claim that they are “just following the law”.

Miller believes the loophole is by design. “This section is such an outlier in the bill that it looks to have been crafted by the same people behind the ‘Reimagine The Alamo’ plan to give them official cover for removal of the Cenotaph.”

Even with SB226 in play, the Alamo and the venerated Cenotaph are still in danger and perhaps even more than before. Contact State Senator Pat Fallon (512-463-0130) and let him know that until the Cenotaph Loophole is removed, SB226 is a no-go.