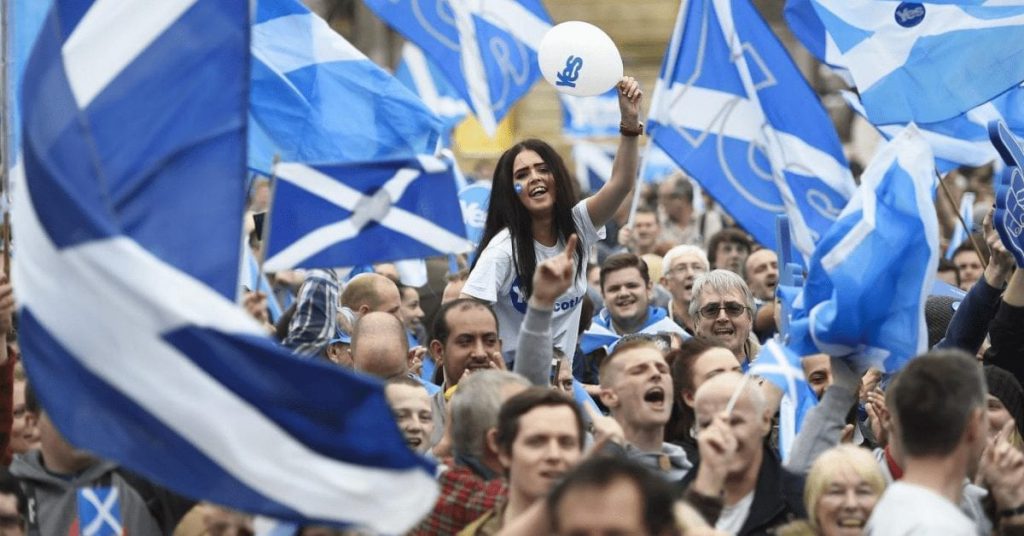 With the Scottish referendum in the rearview mirror and Texas independence growing closer in our windshield, it’s time for one quick look to see what Texans can learn from their experience.

Before we start, it’s important to remind everyone that while there are lessons that we can learn from the Scottish referendum, it is not a 1-to-1 comparison. There are very significant political, economic and cultural differences between Texas and Scotland.

This goes for every other self-determination movement around the world. Scotland is not Texas. Catalonia is not Texas. Only Texas is Texas. Therefore, every lesson that we learn from them has to be weighed before it can be applied to our situation.

That said, let’s get started. Here are the 5 lessons that the TNM can learn from Scotland’s vote.

Never Start Behind The 8-Ball

While the Scottish National Party is in power, it is by no means overwhelmingly dominant. While they hold a slim majority in the Scottish Parliament, they achieved control of the Scottish government as a function of the political system and not by an outright majority of voters.

There is obviously a lesson here about the differences in our political systems and the non-effectiveness of starting a political party in our current political system, the real lesson is in never fighting an opponent on their turf.

Prior to the SNP signing the Edinburgh Agreement two years ago only 1/3rd of Scottish voters supported Scottish independence. Before the ink was dry on the document that got Scotland the referendum, they were deep in a hole. And throughout the course of the next two years, the hole proved too deep. And this has, unless there is a major event, deprived Scotland of independence for at least another generation.

Texans can be sure that we’ve got a hill to climb. It’s exactly why the Texas Nationalist Movement has called for a non-binding referendum first. When we have a binding referendum we have to be 100% certain that everything that can be done has been done. Much like Sam Houston retreated the Texian Army all the way to San Jacinto to give them the most favorable conditions for victory, it must be so for us. Independence is too important to risk a loss because we are impatient.

Much like what occurs in Texas when pollsters get the “independence bug”, over the last several years, Scots have been polled to determine how they identify themselves. Do they see themselves as Scots, British or both?

These numbers played a significant, and often overlooked, factor in the “no” vote.

If you think Texans fair better in these numbers, think again.

Texans take heed. No matter how you want to “soft peddle” it and wish it were different, the number of Texans who self-identify as Texans only must increase substantially for independence to happen in a reasonable time frame.

The number of people marching to memorialize the Alamo every month is just as important as having numbers of people protesting the issues of the Texas border or protesting for a vote on Texas independence.

The foolish ignore the cultural mission of the Texas Nationalist Movement and do so at the risk of delaying our independence.

No Risk, No Reward

People are risk averse. No matter whether they are Scots or Texans, people want to weigh their options and make choices that offer the least risk.

In Scotland, while the risk associated with independence was not the only issue, it was still an issue nonetheless.

The risks were played up by the “No” campaign. The “Yes” campaign did a great job of addressing these risks with facts and policy positions over the last two years. The Scottish government even released an extensive white paper addressing nearly every facet of Scottish independence and advocating post-independence policies as though they were dead certainties.

But it was a trap.

The “No” campaign was able to cement those positions as factual certainties in the minds of voters and pivot the debate to those policies. It became less of a referendum on independence and more of a referendum on the governance of the SNP. It should be no coincidence that the percentage of “Yes” votes was roughly equivalent to the percentage of SNP votes in the last election.

As Texans we must resist the “policy trap”. The decision to argue the post-independence policies rather than maintain focus on the Scotland’s vision versus the Westminster vision only served to highlight the risk in the minds of the voters. Rather than debating that Scots were the best people to decide how Scotland is governed, the referendum became about a future that no one could guarantee.

But there is no guarantee other than this – until Texas is independent, no matter what we want, Washington will always be there to hinder or veto it. It is guaranteed that Texas will lose its place in the world if it remains as part of the Federal system.

While the Scottish National Party took the lead on the “Yes” campaign, they were not the entirety of it. A conscious decision was made to incorporate other political groups into the fold to, hopefully, expand the support base for a “Yes” vote. In doing so, when the independence debate expanded, the coalition complicated matters and muddied what had before been clear water.

For example, when Scottish communist groups publicly came out in support of the “Yes” vote and began to actively participate in the coalition, the “undecideds” got nervous. While Scotland is left-leaning, the participation of the Scottish Greens also drove some of the “undecideds” into the “No” camp.

As the debate turned to post-independence policy, and the “Yes” campaign obliged, the different messages coming from different members of the coalition served to only confuse the issues that has been so clearly spelled out at the beginning of the campaign.

It’s Not Over Until It’s Over

Scotland entered into the UK in 1707. In 2014 the people of Scotland finally were able to go to the polls and have their voices heard on the issue of independence.

It was a long and hard road to get there, paved with the blood, sweat and tears of everyone who came before. They had ups and downs. Mostly downs. But all of that paid off in recent years as Scotland worked to take its power back.

And while they say that Scotland’s vote will be a once-in-a-generation event, don’t count on it.

The UK was able to sway many undecided voters by promising them greater autonomy and powers within the UK. As such, the English, Welsh and Northern Irish are livid. Make no mistake, if the world thought that Scotland’s referendum was a threat to the existence of the UK, the promises made to keep them in it almost certainly guaranteed the UK’s future dissolution.

The trend toward self-determination continues unabated. It did not stop on 9/18. Scotland will have its bite at the apple as will the remaining parts of the UK. Not to mention Catalonia, Belgium, Venice, Padania and Texas.

Which is brings us back around to home sweet home.

It is important that Texans understand that we are part of a bigger picture. While we focus on Texas and only Texas, we have to know that what we do here matters all over the world. As Texans were fixated on what was happening in Scotland, Texas Nationalists can take heart that the world was looking at us.

The Texas Nationalist Movement is the standard bearer for freedom and self-determination among the states of the United States. We have accomplished more and had more of an impact than any other independence organization in the States. It can all be attributed to perseverance.

We don’t quit. We don’t stop. Because we know that it’s not over until it’s over. And it’s over when Texas stands free and independent.