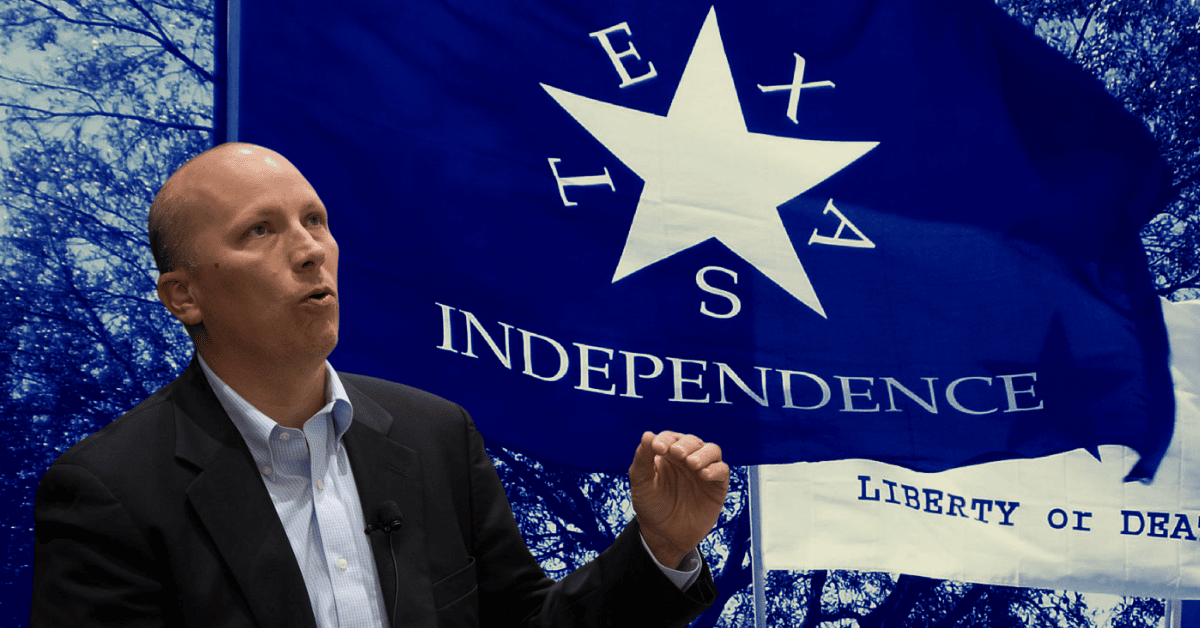 U.S. House Representative Chip Roy from Texas spoke bold truth on the floor of the House this week, declaring that Texas is under siege. In so doing, he made the case for TEXIT.

On the 185th anniversary of the Battle of San Jacinto, the day Texas won its independence from Mexico, Rep. Roy echoed the heart of all freedom-seeking Texans when he said, “One has to wonder whether the agreement that Texas made when entering this union remains worth it…”

Above all, the Constitution is a contract. Many opponents to TEXIT claim it would be unconstitutional for Texas to withdraw from the Union, but even if that were true, the U.S. government has already broken the contract. Article 4, Sec. 4 of the Constitution states, “The United States shall guarantee to every State in this Union a Republican Form of Government, and shall protect each of them against invasion…”

Do not be deceived. What is happening at the Texas border right now is not just a humanitarian aid crisis. It is an invasion. The porous border is an open invitation to America’s enemies and criminal enterprise. Powerful drug cartels organize and control who enters the United States, as the federal government abandons the rule of law. The cartels decide when and where groups should cross to deflect border security. The magnitude of unchecked sex trafficking and human trafficking cannot even be calculated, nor can the amount of deadly narcotics being transported or the influx of gang affiliates and terrorists.

As Rep. Roy stressed to Congress, this is a siege on Texas communities. Counties along the border are declaring disaster emergencies, as law enforcement is overwhelmed by human trafficking and a rise in crime. Along with state’s rights, the rights of private property owners are being trampled, as illegals trespass and damage ranches and homesteads. A major public health threat is the flood of fentanyl into the State, reaching levels unheard of for any other drug in history.

NPR reports that more than 170,000 illegal immigrants were taken into custody at the Southwest border in March 2021, including Texas and other border States. These are merely the known offenders detained in one month, not the countless others who entered without capture or notice. And the Biden administration is releasing detainees into the State of Texas without Covid-19 testing, without court dates, and without accountability – but supplied with hotel rooms, food, healthcare, cash, and transportation at taxpayer expense.

Texas schools continue to be overrun, and hospitals are inundated, as they have been for decades, due to ineffective and inconsistent federal immigration policies and enforcement. Studies indicate that Texas alone spends $12 Billion a year to mitigate the impact of illegal immigration.

To be clear, Texas is not opposed to immigration. Texans want structured immigration policies that are rational and fair to current citizens and to those who wish to become citizens legally. Texans also demand a secure border, which is the duty of the federal government according to the Constitution.

The disastrous actions of the U.S. government at the southern border represent a unique attack on Texas. For supporters of Texas Independence, these actions are merely others in a long line of abuses. Supporters of TEXIT are no longer wondering whether staying in the union is worth it. We are wondering when the people of Texas will claim their inherent political power guaranteed by the Texas Constitution and exercise their political will to declare their independence from a failed federal government.

For more information on TEXIT and HB1359 referendum, please visit tnm.me/texit. Find your state representative at tnm.me/legislature/ and call them and tell them to sign on to support HB1359.