COVID-19 Forcing A Battle Between Texans And Their Government 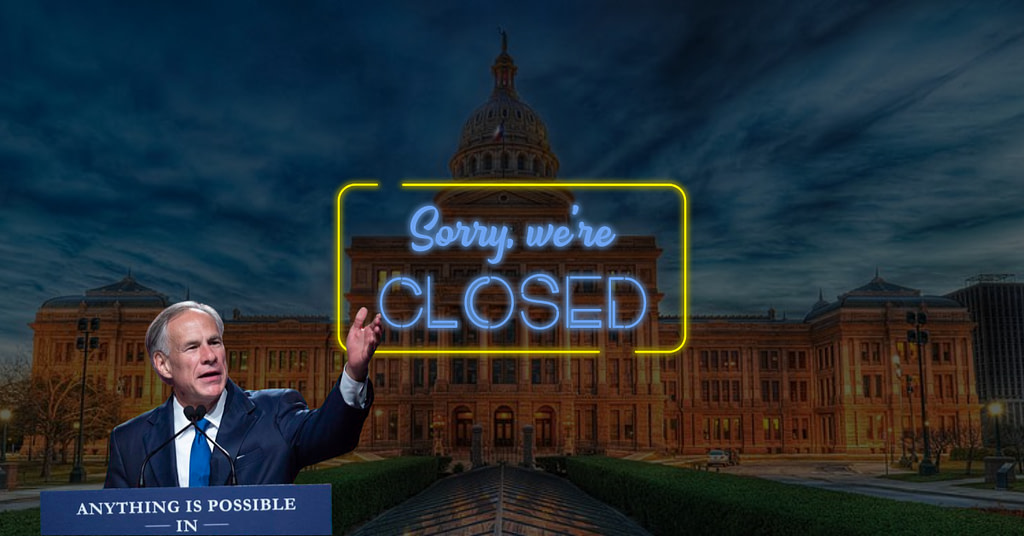 COVID-19 Forcing A Battle Between Texans And Their Government

COVID-19 has sent the entire Texas economy into an unprecedented tailspin. The effects of the government-induced shock will outlast the virus itself. However, COVID-19 has exposed the massive dysfunction and hypocrisy from the Texas political establishment and Texans are furious.

Under the cover of restrictions ordered by the federal Centers For Disease Control, Governor Greg Abbott imposed seemingly arbitrary restrictions on companies and small businesses, forcing them to lay off unprecedented amounts of workers and creating economic devastation. Unemployment rose to 4.7% in March, and Comptroller Glenn Hegar predicts it could reach 9% or higher. In March, the Texas Leading Index, a single statistic that measures the future of the state’s economy, had its steepest plunge since its inception.

The Many Faces Of Abbott’s Response To COVID-19

Texans are not only fighting to determine what is true and what is hype against the backdrop of financial uncertainty. They are also enduring the chaotic, contradictory, and ever-changing mandates from the state government. On March 19th, Gov. Abbott issued an executive order, closing bars, dine-in restaurants, schools, and gyms. Weeks later, he issued another executive order extending the original, but clarified it was not a “stay-at-home” order. He worried that calling it such would make residents believe they couldn’t leave their homes. Instead, his order was informally labeled “Essential services and activities only.”

This left Texans to question what qualified as essential, and whether to follow various and often excessive or contradictory, local mandates or the ones from the state. The language within the order was weak and arbitrary as well, “[Texans] shall, except where necessary to provide or obtain essential services, minimize social gatherings, and minimize in-person contact.” This was only the beginning of a long string of vague statements, inconsistent mandates, and confusing press conferences.

It came as a shock to Texans when Gov. Abbott’s order stated that failure to comply could result in a $1,000 fine, jail time up to 180 days, or both. The rigidity of these punishments quickly came crumbling down under the tsunami of a political backlash when a Dallas salon owner was arrested for opening her business against the state’s order. This led Gov. Abbott to reverse his stance in a statement to the media.

“Throwing Texans in jail who have had their businesses shut down through no fault of their own is nonsensical, and I will not allow it to happen.”

“Gov. Abbott calls the actions of a Judge in Dallas excessive, when the Judge was acting based on Gov. Abbott’s order. Gov. Abbott is now upset that a private citizen is in jail for operating a private business, which is a consequence of his order.”

In another example of pure hypocrisy, Gov. Abbott went on Hannity and backpedaled.

“In Houston, they were issuing fines and potential jail time for anybody who refused to wear a mask. Wearing a mask is the best practice, however, no one should forfeit their liberty and be sent to jail for not wearing a mask.”

This came after Gov. Abbott himself issued the order with the threat of fines and jail time. Houston Police Chief Art Acevedo spoke up against him in a tweet.

“you shouldn’t issue orders that include the jailing of violators to cover the science, just to turnaround & excoriate those who enforce YOUR executive order to cover the political backlash. Your actions are hypocritical.”

Texas’ economy has suffered in part due to these inconsistencies and reversals. Take the service sector for example, it makes up 70% of Texas’ economy and employs almost 9 million people. The revenue index, which measures the service sector’s conditions, fell an unprecedented 81 points in March. In May, once certain businesses were allowed to reopen, the index rebounded a whopping 37 points; Texas was on its way to rebuilding the service industry.

In July, however, the index once again fell 14.2 points, indicating a sharp decrease in jobs and wages. This wasn’t because of the virus. It was thanks to Gov. Abbott who flip-flopped on his plans to reopen the state. On May 18th he had announced all bars, daycare, beauty salons, bowling alleys, and more could reopen. These businesses hired back employees, took out loans, and reopened as quickly as possible to make up for lost time and money. Then only a few weeks later, he announced all establishments that earn 51% or more of their sales from alcoholic beverages must again close, and limited dine-in restaurants to 50% capacity. This step backward crippled already struggling bars and small businesses, forcing more layoffs and a wave of business closures.

The Constitutional Cost Of Political Pandering

How Gov. Abbott has worded, interpreted, and contradicted his executive orders reflects his attempt to find a middle ground between his core constituents who want to get back to work, and some who argue that he hasn’t closed the state long enough. For a politician who lives by poll numbers in a difficult position. Who exactly should he pander to and how should he do it?

With Gov. Abbott being pulled in a million directions, and seemingly immune to the voice of ordinary Texans, he has retreated into his establishment echo chamber and fallen back on the convenience of executive orders, issuing over 20 within the last few months. Although executive orders are more immediate, there is less clarity and specificity, which increases the likelihood of disputes and unforeseen changes. Additionally, it has become increasingly clear that these executive orders are in direct violation of the Texas Constitution.

Gubernatorial executive orders should be few and far between because they bypass the input and voice of our legislators, the very individuals who are elected by the people for the people. Now more than ever, Texans have felt the notable absence of the Texas Legislature. Not only are most legislators more than happy to let Gov. Abbott do the heavy lifting, virtually none of them have even whimpered about having their Constitutional authority usurped.

Currently, the Capitol is closed except for a skeleton staff and state troopers. The Legislature won’t be in session until January unless Gov. Abbott calls a special session, which appears unlikely as he seems comfortable ruling by decree. Texans are wondering why their representatives are missing in action. They can’t conduct hearings to discuss interim changes or hold hearings over Gov. Abbott’s executive orders without allowing the public into committee rooms. Under the current rules, these hearings aren’t allowed to be conducted online. The Texas House and Senate have not had a hearing since March 10. The next session seems likely to happen behind closed doors under the threat of COVID-19. But it could be dangerous for many reasons other than the virus.

It’s an open invitation for lawmakers and representatives to skirt accountability and avoid answering to the public, a problem we already face. Texans that are still employed have adapted to working, meeting, learning, and even exercising virtually or socially distanced, yet our Legislature can’t seem to follow the same guidelines that the state government is imposing on us. At least 23 other state legislatures have issued resolutions or adaptations for sessions to keep their governments afloat. Texas does not allow for that flexibility, and it doesn’t appear they will anytime soon.

The Slightest Hint of a Backbone

The Texas Constitution declares that the Legislature is the sole law-making body in our state government. Within the past few years, however, powers have been quietly shifted to the Governor under the auspices of dealing with emergencies, such as natural disasters. Because of this, there is no longer a distinct separation of power or oversight from the Legislature.

In July, the staunchly conservative Texas Freedom Caucus called for Abbott to reform the Texas Disaster Act of 1975. This Disaster Act was originally intended to grant governors expansive authority in response to natural disasters, such as hurricanes. The Texas Freedom Caucus argued, however, that the act should only be used in circumstances with a clear end in sight. Otherwise, we end up with what we have now, one person as the face of our pandemic response and minimal input from representatives and, therefore, the people.

The caucus proposed imposing a time limit on gubernatorial disaster declarations, which would involve the Legislature if further action is needed. The caucus’ leader, Rep Middleton (R-Wallisville), said in a letter:

“Actions pressed with the force of law need input from those elected to write laws. The separation of lawmaking, law enforcement, and law interpretation are the foundational checks and balances that make Texas and America exceptional in the world. Many Texans fear that we have drifted away from those checks and balances.”

He is absolutely right. Texans are worried more than ever about executive overreach and what power our elected officials hold.

This month, five Republican lawmakers have filed a lawsuit against Gov. Abbott and state health officials for unlawful executive overreach. The ambiguous Texas Disaster Act that granted Gov. Abbott the temporary authority to make major policy decisions, allowed him to sidestep the contract bid process and award an almost $300 million deal to a small town tech firm to track COVID-19 cases. The suit stated, “The Texas Constitution requires a separation of powers, and that separation leaves policy-making decisions with the Texas Legislature.” Many lawmakers, including those listed in the lawsuit, have demanded Gov. Abbott to call for a special session to allow lawmakers to give their input on his frivolous orders.

COVID-19 has exposed the faults in our local, state, and national governments. With each of Gov. Abbott’s executive orders and inconsistent mandates, it’s clear that Texas is no exception to those shortcomings. Texans are worried about their financial situations, job security, and how to continue everyday life without being handicapped by an invisible threat.

Gov. Abbott has proved he is not equipped to lead the state as a “solo act”, making the absence of legislative input that much more glaring. The legislature has a rough road ahead of them. They’ll have to find a way to reclaim their usurped authority and save the economy. They’ll not only have to remedy the damage that the government’s response to COVID-19 has caused–deaths, social distancing, unemployment, business closures–but they’ll also have to address the underlying issues the pandemic has exposed.

A January 2021 session behind closed doors is the worst-case scenario; the very foundations of a Legislature are based on public interactions, the Capitol is intended to bring people together, not keep them apart. The power balance must be restored back to our representatives and lawmakers, the pain of ordinary Texans must be heard, and their livelihoods must be taken into consideration.

The one unintended consequence of the dysfunction coming from our Capitol has been a fundamental reassessment by Texans of the merits of the TNM’s case for Texas independence and how it can break the grip of the political establishment that puts us all in this mess. It’s a reassessment that is long overdue.

Rise Up and Let Your Voice Be Heard!

Dinner with Daniel Miller and TNM Leadership In Waco