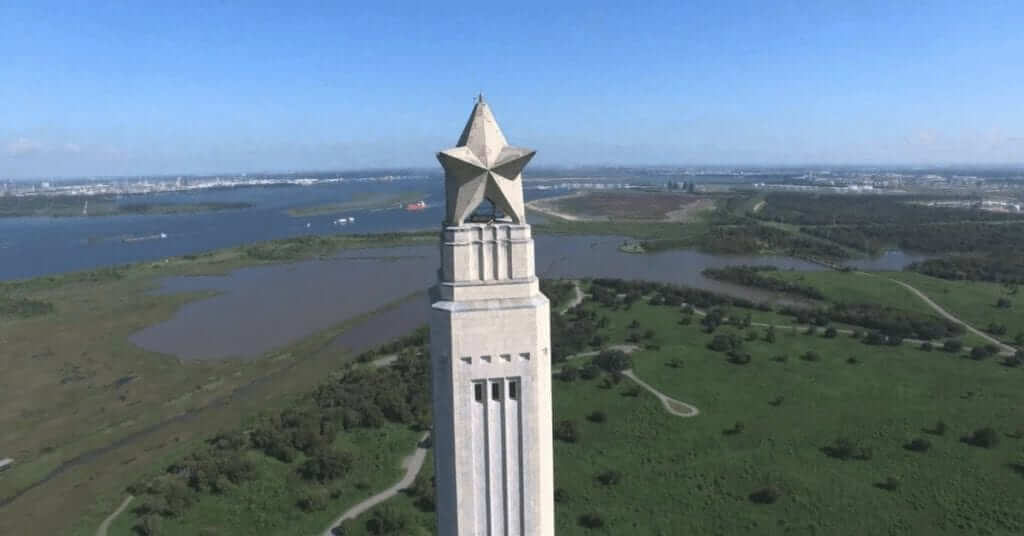 “We view ourselves on the eve of battle. We are nerved for the contest, and must conquer or perish. It is vain to look for present aid: none is at hand. We must now act or abandon all hope! Rally to the standard, and be no longer the scoff of mercenary tongues! Be men, be free men, that your children may bless their father’s name!” –Sam Houston, before the Battle of San Jacinto.

It is April, 1836: the fledgling government of the Republic of Texas struggles to remain in existence. In overfilled wagons, on horseback, and on foot, Texian women and children leave behind their homesteads and villages to escape Santa Anna’s approaching army. Marauders plunder the vacated homes and villages, and advancing Mexican troops burn what remains to the ground.

After losing hundreds of men and suffering five crucial defeats to their cause, Sam Houston’s untrained band of ragtag patriots is retreating eastwards. Some of them abandon, concerned about their unprotected wives and children.

The fate of nations lies with Houston’s men— men with empty stomachs, holes in their shoes, and a worrying lack of ammunition and training.

On April 21, Santa Anna’s troops and Houston’s men finally face off at San Jacinto. The Texians are again outnumbered; to make life more interesting, they have retreated so far that they are backed up to two bayous with no possibility of escape should things end badly (as is very, very possible). Yet with shouts of “Remember the Alamo!” and “Remember Goliad!” the Texians win.

185 years have passed since this unexpected and improbable victory, the triumph that won Texas its independence—an elusive prize for which many gave their lives.

Modern Texians read about, delight in, and reenact this victory. To some it may seem like washed-up high school athletes reminiscing over their “glory days,” but nothing could be further from the reality of this state’s potential for independence.

Texas’ days as a nation are not necessarily over: we can rise among the nations once more, but only if Texians decide that they want to be free and will again sacrifice something to obtain that freedom.

“We must now act or abandon all hope!”

Throughout the 1830s, Mexico’s government steadily worsened until at last a lawless caudillaje emerged, a brutal military serving as the state. Texas was not singled out for militaristic rule; Mexico was also governed by garrisons of troops. The difference between Mexico and its northern neighbor was in the reaction to the bout of tyranny.

For the past century, the United States’ federal government has grown ever larger and more intrusive. Its absorption of private sector resources and its violations of individual rights are not prevented by the constitution designed to restrict it, neither are they halted by the efforts of freedom-loving representatives. At best, they are merely delayed or lessened.

Texas’ situation in 1836 is in many ways similar to the one it faces now: a much-changed government threatens it with new regulations, legislations, and infringements upon natural rights, and no ordinary efforts are stopping the onslaught.

Somewhat like the 1820s and 1830s Mexican government, the American system has changed and is finding new, creative ways to eliminate freedom and individual choice—in healthcare, in retirement savings, in self-defense, in education, in transportation, in communication. This time the solution to the plague of totalitarianism is to break away from the system entirely.

The eve of battle

Many of Sam Houston’s men paid for Texas independence with their lives. The war (short as it may seem in retrospect) scattered families and ended in a great deal of physical destruction.

This time, Texians fight the battle for independence not with rifles but instead with ideas. The sacrifices for supporters in our day are not as life-defining or dangerous, but the stakes are just as high.

Bystanders often think that independence is an optimist’s pipe dream. A number of 1836 spectators shared that conclusion, but fortunately were not right. Counting the costs matters little and counting the odds matters less, but calculating the stakes matters a great deal: liberty is on the line.

We find ourselves on the eve of a battle that is every bit as defining as the one that took place at San Jacinto 185 years ago today. Will you rally to the standard?