The Feds Came For It And Texas Gave It: Texas Caves Over TSA Groping 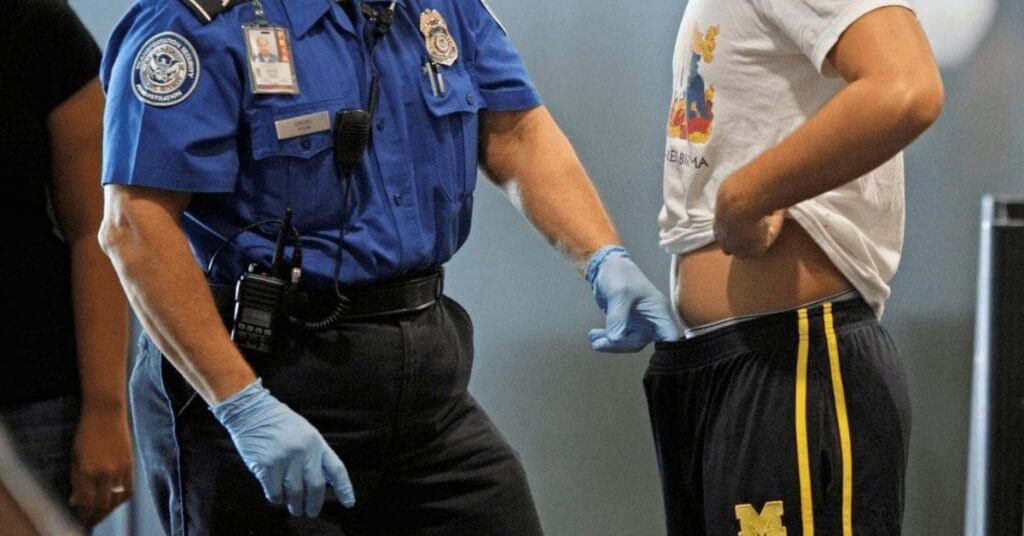 In 1938, Neville Chamberlain, Prime Minister of Great Britain, returned to England after negotiating a settlement with Hitler and Nazi Germany. After years of Nazi aggression in Europe where country after country fell to the German war machine, Chamberlain, touting the success of his doctrine of appeasement publicly boasted that he had secured “peace for our time.”

Today Texas faces aggression more insidious, though less violent, than that faced by Europe in the 1930s and 1940s. This time it flows not from Berlin but from the vicinity of the Potomac River.

Yesterday, the Texas Legislature took a cue from Chamberlain and bowed to a Federal Government threat to shut down air travel if Texas criminalized the touching of people’s genitals by TSA workers at airports.

The United States Department of Justice, in anticipation of the almost guaranteed passage of the bill fired off a letter to the Texas Senate threatening to shut down all air travel in Texas if it passed. Channeling the spirit of Neville Chamberlain, Lt. Governor David Dewhurst in concert with Senator Kirk Watson used this threat as an excuse to work behind the scenes to kill the bill.

Until this legislative session, appeasement has never been a part of the Texan character. The actions and inactions of this session of the Texas Legislature serve to tarnish the memory of the heroes of Gonzales, the Alamo, and San Jacinto. They have forgotten the lesson of Goliad – surrendering to tyranny is often followed by your own massacre.

While this legislation and all of the circumstances surrounding it may seem like an odd rallying point for the Texas Nationalist Movement, it must be.

Our Cassandra’s Cry has, for years, been that the Constitution of the United States has been destroyed and that there is no saving the Union. The TSA’s actions in fondling men, women, and children are a violation of the rights guaranteed in the 4th Amendment to the United States Constitution. Texans should have the right to be secure in our papers, persons, and pants.

In addition, Texas should have the right under the 10th Amendment to regulate activities within its own borders and stand against the intrusion of the Federal Government into the lives of Texans that exceeds its Constitutional mandate.

In essence, the Federal Government has said that:

If you don’t let us fondle your men, women, and children then we will cripple your economy.

This is a message that has been repeated on more than one occasion over the last several years. On the issues of energy, agriculture, the border, and many others, the Federal Government has stuck to its party line – this is our party and you’ll cry if we want you to.

If they believe that tyranny administered by the TSA is acceptable then I invite Lt. Governor Dewhurst and Sen. Watson to bring their wives and children to the South Steps of the Capitol where they will be given a standard TSA search. If, after subjecting their spouses and children to this humiliating public display as thousands of other Texans have, they still find it acceptable then we will never speak on this subject again.

It is time for Texas to fulfill the words of Sam Houston. It is time for us to lift our head and stand among the nations. It is time to put an end to Federal threats, Federal inaction, and Federal encroachments on our sovereignty.

To accomplish this, the people of Texas must stand up for freedom and independence. They must assert their national character and overcome the do-nothing politicians in Austin. This is no longer about the politicians. They cannot solve the problem. This is about the people.

I call on all the people of Texas who care about freedom and independence to rally around the cause of the Texas Nationalist Movement and work with us to end Federal rule in Texas once and for all.

Unlike the Texas Legislature, the Texas Nationalist Movement is committed to securing and protecting the independence of Texas no matter the threats and no matter the cost. While they have repeatedly caved and wavered, we have not. As we have met challenges on our road to independence we have adapted and overcome. While the Texas government has stood silently by as Texas has become the whipping boy of Uncle Sam, we have exercised every method at our disposal to rage against the machine of tyranny. When we fly the “Come And Take It” flag, we mean it.

Where the Legislature has failed to lead, we will.

The message from the members of the Texas Nationalist Movement to the Texas Legislature is simple: “You’re sitting in our seats.”

The Feds Came For It And Texas Gave It: Texas Caves Over TSA Groping