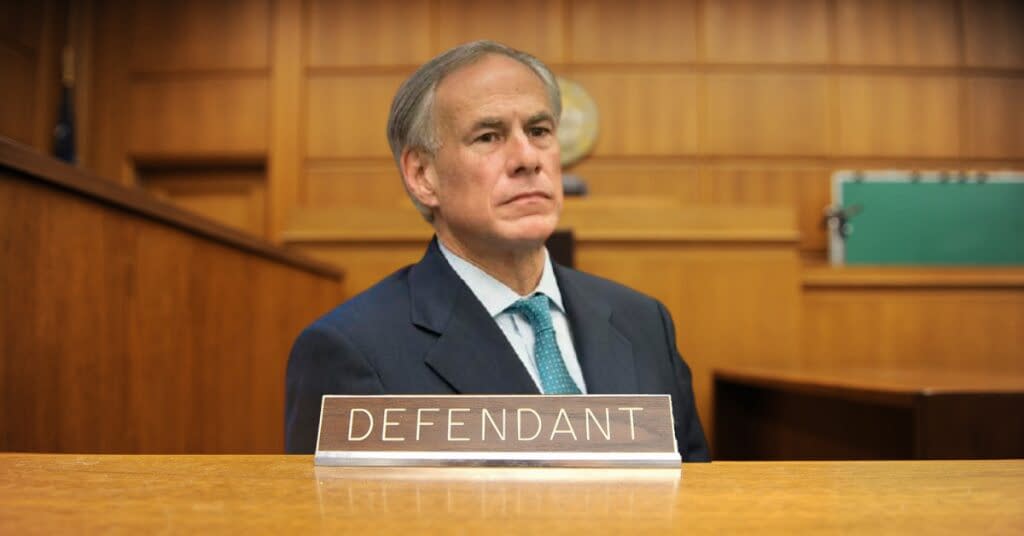 Texans deserve an opportunity to decide whether Texas should be governed by Texans or by unelected bureaucrats a thousand miles away, or even by bureaucrats in Austin seeking to sell Texans out because of their own political opportunism. Court is now in session in the case of “The People of Texas v Greg Abbott”.

Founded on the principles of liberty, limited government, and self-determination, Texas joined the union while retaining its individual and distinct status as a sovereign state. Sovereignty can be delegated but never relinquished. Per Article I, Section 1 of the Texas Constitution: Texas is a free and independent State, subject only to the Constitution of the United States, and the maintenance of our free institutions and the perpetuity of the Union depend upon the preservation of the right of local self-government, unimpaired to all the States.

By the misguided exercise of authority as Governor of Texas, Greg Abbott has failed to faithfully keep the best interests of the People of Texas above his political ambitions. On no less than four occasions, Greg Abbott has shown a lack of understanding of and honest commitment to the laws and principles of the Texas Constitution.

Texas is currently being manhandled by Federal interests, and by the self-interests of Texans like Governor Abbott who seek to aggrandize themselves to a federal audience. The clear solution for Texas is to divorce itself from an unwieldy and financially bankrupt Union and elect statesmen whose ambitions can naturally extend no higher than Texas and thus whose self-interest more closely parallels the interest of Texans.

In a recent poll conducted by The Texas Politics Project at The University of Texas at Austin, a mere 29 percent of Texans heartily approved of the Governor’s handling of Texas’ affairs. Similarly, 20 percent of respondents strongly disapprove of Governor Abbott.

We believe that these recent polls numbers are especially troubling given the Governor’s heavy-handed approach to managing the COVID-19 pandemic’s effects on Texans’ economic livelihoods and liberty as individuals.

Throughout his administration, Governor Greg Abbott has demonstrated that he is incapable of and unwilling to respect the principles of self-determination and limited government.

Abbott, like many of his conservative Republican colleagues, far too often pander to those who support Texas Independence during election season and then leave us high and dry until the next cycle. This dysfunctional cycle has to stop if Texans are to reclaim the freedom and independence of Texas.

The culmination of Greg Abbott’s actions and corresponding inaction demonstrate that he is no more than a politically correct opportunist, firmly entrenched in the Republican political establishment.

We, the People of Texas, deserve better than the following counts of civil negligence depict:

COUNT 1 – Conspiracy to violate the sovereignty of Texas

On January 8, 2016, Governor Abbott unveiled his Texas Plan to call a convention among the States, outlining his plan of amendments well ahead of time.

This act demonstrated that Governor Abbott is more invested in the Federal Union and in future political opportunities than he is in freeing Texans from the bonds of an over-taxed surveillance state with millions of un-elected bureaucrats.

Under the guise of restoring the Rule of Law and the Constitution, we believe Abbott’s Texas Plan was simply a tactic to appeal to patriotic citizens rightfully concerned about a dysfunctional federal republic with a solution that was (and is) clearly going nowhere.

Article I, Section 23 of the Texas Constitution, and the 2nd Amendment of the United States Constitution affirms the right of Texans to keep and bear arms for the defense of themselves and in defense of Texas.

Texans earned their independence from Mexico by the blood of patriots, and Texans past and present well understood that their personal firearms have the power and the responsibility to secure liberty for themselves and their posterity.

During the Republic’s formative days, firearms were more than weapons of war; they were instruments of survival and self-defense.

But Greg Abbott, amid the radical left’s gun grab, issued eight different Executive Orders, following the Odessa and El Paso shootings, to give The Department of Public Safety extraordinary leeway to monitor our online activity.

Furthermore, these so-called “suspicious activity reports” provide the proof necessary to level such an accusation against a sitting Republican Governor who claims to be a Constitutional conservative.

Hiding behind lofty ideals and sacred responsibility to strengthen public safety, we contend that Governor Abbott has gone soft on the radical left and its liberty-destroying agenda.

At the time of this writing, the United States, as we know it, is dissolving. The mechanism of such degradation is what’s becoming known as Cancel Culture, the overly idealistic left-wing movement that apologetically promises to erase and replace our history.

The movement to “Reimagine The Alamo” is an egregious example of Cancel Culture encroaching upon our once-proud Republic of Texas.

There is no more sacred site to Texans than The Alamo. Yet, Governor Abbott has sat by silently as management of the site has been snatched away from the Daughters of the Republic of Texas and placed under the jurisdiction of the federal bureaucracy and UNESCO as a World Heritage Site.

All across the United States, historical monuments are toppling one by one, literally yanked to the ground by mobs who claim to be fighting for positive, non-violent change.

Texans deserve a better leader who will protect their cultural identity and history and stand firm against Cancel Culture.

COVID-19 has turned the whole United States on its head, and there is no end in sight.

As an executive, Greg Abbott is responsible for executing the laws passed by the legislature, and is the Command-In-Chief of the Texas Military Forces. His objective is thus to defend Texas from external attack and to enforce its laws. He is not, however, given the authority by our Constitution to create new law or create bureaucracies with federal monies thwarting the consent of our legislature.

Rather than stand firm and do what will work best for Texas, not every other state, Governor Abbott chose to use a hatchet instead of a scalpel to fend-off COVID-19.

The forced closure of businesses is, in principle, telling a private business owner that s/he can no longer use the property for their own purposes, which is nothing less than the theft of this property by the public. In Texas, this is expressly prohibited by Article I, Section 17 of the Texas Constitution, and Texas owes each closed business damages from lost profits on this basis. Governor Abbott, as a former Attorney General, knew full-well that this order was beyond his legal reach.

Moreover, Abbott’s response shows a fundamental lack of respect for the rule of law and the constitution he swore an oath to uphold. All Texans have a responsibility to protect themselves and their loved ones from COVID-19 as they see fit without the heavy hand of government dictating every personal decision.

The answer for Texans is clear: Texans should decide what is best for Texas. We deserve better than self-interested governors seeking to compete with other governors in heavy-handedness or to seek to prove themselves to a national electorate while still in service to Texas.

However, if Texans were in charge of the destiny of Texas the interests of our politicians would be naturally calibrated to extend no higher than the big blue sky of Texas. More importantly, our leaders would no longer be under the administrative and bureaucratic thumb of Washington, D.C. and otherwise extorted by FEMA funding.

Texas deserves the very best we can give her. Let us stand together and in one voice declare that Texas is and will forever be a nation made up of a diverse but fierce people who will stand at her side and will not allow her to be pulled under the waves by the anchor of the federal union.