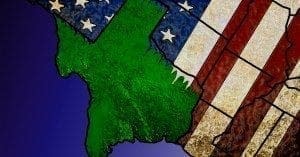 Those of you who have been regular readers of the Texian Partisan might remember our series on this topic (1, 2, 3), where we detailed the federal government’s appropriation of nearly a hundred thousand acres of privately owned Texas land, in contravention of long-standing treaty. With the announcement of a settlement, the land taken along the Red River now reverts back to the land-owners, and the jurisdiction over that land reverts back to Texas.

This is very good news, not only for the land-owners involved, but for all Texans who care about Texas sovereignty. Certainly, law was on the side of Texas from the beginning, but this still could have very easily gone wrong. When dealing with federal bureaucrats and judges, often the law isn’t the main concerning factor, but rather the political ends sought. But for once, the federal government FINALLY did the right thing in withdrawing its claim. Today, Texas wins.

Daniel Miller, President of the Texas Nationalist Movement had this to say about the court’s acceptance of a settlement in the case:

This is a great victory for the sovereign rights of Texas and the private property rights of Texans. It is a shame that we have had to resort to constant legal battles against the Federal Government to preserve both. While we have prevailed in this instance, the only way to bring an end to this revolving door of litigation against the Federal Government is for Texas to once again assert its status as an independent nation.

It is a sad commentary on the state of the Union that we must constantly defend what is clearly ours, be it land, rights, or sovereignty. This time, we had an administration that decided it wasn’t in their political interests to continue to defend a usurpation of Texas land that spans three presidents. Unfortunately, tomorrow we will be at the whims of another president, and we WILL begin all over again with some new federal outrage. Although, next time we may not be as lucky.

The Red River land grab should serve as warning to all Texans that Washington takes what they want, when they want it. And even if they admit it was a mistake, they will extract a heavy toll in time and treasure before making it right. It’s time that we abolished this extraneous level of bureaucracy that constantly interferes with our right to local self-government. It’s time to Texit!