When Did Supporting Our Rights Become Treason In Texas? 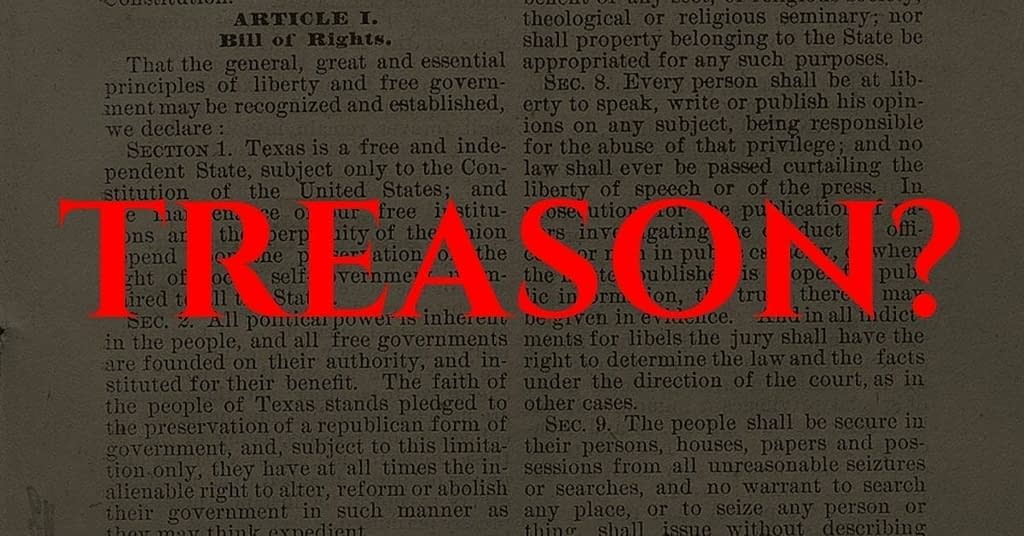 When Did Supporting Our Rights Become Treason In Texas?

Is it really treason to demand that your government keep up its side of the political bargain under pain of divorce? If it is treason, then is that same government really yours?

In 2016, the British people overwhelmingly chose to separate from the democracy-killing European Union and once again take up the mantle of full sovereignty. And while this separation is still scheduled to officially take place this Halloween, many in the British Government’s political establishment have been actively working to thwart the will of the people (expressed through popular referendum and in law through Article 50), to delay and even stop BREXIT through political back-dealing, even allegedly through colluding with the government in Brussels. Renowned historian David Starkey, when asked, framed the actions of Remainers in Parliament to subvert BREXIT as an end to the constitution of the glorious revolution and also the Magna Carta, that by its actions, parliament has “openly reversed the notion of representation.” “‘The old word for it is treason,’” said Starkey.

In the US, when the idea of Texas (or other states) declaring independence from its own intractable union is raised, it often gets a very different response than in the UK. Harkening back to melodramas about the American Civil War and the careful programming of government schools, the mention of states declaring their independence from Washington can evoke calls of “TREASON!” But is it really treason to demand that your government keep up its side of the political bargain under pain of divorce? In a word, no, not by the Constitution. But if the word is to be applied liberally, it has implications for those that would all too often use it to silence their opponents.

The U.S. Constitution is clear on the matter of treason, defining it as “levying war against them, or in adhering to their enemies, giving them aid and comfort.” That’s by the book for Americans, the legal definition. Promoting secession is none of those things listed in COTUS. And for secession (voting for it or promotion of it) to be treason, it must be illegal first, and stated so in COTUS. Yet, there is no clause in COTUS to prevent a state leaving the Union. In fact, the ninth and tenth amendment make it clear that unless a power is given to Washington or denied to the states, it remains a power of the sovereign states. This includes the power to leave the Union. Sure, you could cite courts or famous politicians trying to make the opposite case, but even the most famous politician is not the Constitution itself. Unless abrogated by amendment, COTUS stands.

If by treason, opponents of state independence mean a loss of faith in the federal political institutions, then they’d be correct. But why should one have faith in a government that is itself faithless? However, it is strange that those eager to declare Texans in favor of divorce as traitors seldom (if ever) consider that treason is a two-way street. If governments derive their powers through the people’s consent, then it stands to reason that governments can be guilty of treason against its people. Much like the UK’s parliament trying to undermine the sovereignty of their own people, is it any less treasonous for US and state politicians to undermine the sovereignty of Texas and other states by unconstitutional governance?

Consider the situation in the US. Routinely, the U.S. federal government operates outside its constitutional mandate, wielding powers that were either not enumerated to it or expressly forbidden. The executive branch wields legislative powers (through the bureaucracy), the Legislative branch passes laws that need to be COTUS amendments to be legal, and the Judicial branch co-opts legislative powers never enumerated it. Sure, one can point to a long tradition of such overreach, but just because one grows used to corruption doesn’t make it any less illegal. All of this effectively works to deny the people of the states their constitutional right to rule themselves. How is that not treason?

Some have rightly described as treason the current actions of the Texas’ governor and lieutenant governor in pursuing red-flag laws, producing a surveillance state where the burden of proof is reversed. Under the proposed new scheme, accused Texas gun owners stand already guilty, and won’t get back any guns the state may confiscate from them until they prove their innocence. But don’t think that Abbott and Patrick came up with this idea on their own. This comes from fear of what Washington will do in lieu of such laws or in pursuit of the furtherance of their own future federal careers. And while not absolving Abbott and Patrick of their treachery, it is doubtful that if Washington was out of the picture that we’d be faced with the same dilemma. This has everything to do with the corrupting influence of the federal government.

The Texas Constitution is clear in setting the condition of our state leaving the Union: “Texas is a free and independent State, subject only to the Constitution of the United States; and the maintenance of our free institutions and the perpetuity of the Union depend upon the preservation of the right of local self-government unimpaired to all the States.” Clearly, that condition has been met. Therefore, how long will our leaders make us endure a federal government that actively denies us our rights and each day seeks to take more away from us before we start applying the “T” word to them? At what point in the encompassing federal tyranny do the Remainers that deny the people their choice and right to peaceably leave the Union deserve the label of traitor? For as those that collude with EU to prevent the People their rights are seen as traitors, perhaps we should view those who collaborate with Washington to deny us our constitutional liberty as deserving a place in the ranks of Vidkun Quisling, Benedict Arnold, and Guy Fawkes.