Why Texans Want to Leave the Union – Interview with Daniel Miller 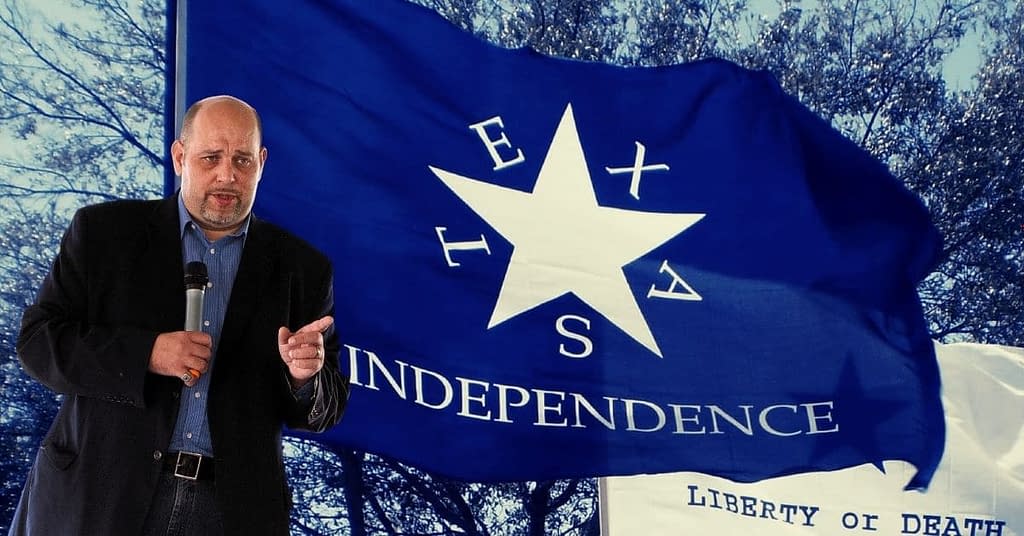 Why Texans Want to Leave the Union – Interview with Daniel Miller

In a February 2021 interview with Joshua Philipp of Epoch Times (Crossroads), the president of the Texas Nationalist Movement answers tough questions about the aspect of Texas seceding from the Union.  Daniel Miller elaborates on ideas and corrects some misconceptions surrounding the issue of TEXIT.

It is important to clarify the definition and differences between the term secession and exit. While some believe these words to be interchangeable, some debaters will nitpick the definitions in order to shift the words and skirt the real issues. Secession is used to describe leaving a central government that has absolute power, with the states being nothing more than administrative subdivisions of that union. However, if sovereignty lies within the states, and the relationship with the union is merely a limited political and economic union with a mutual defense compact, along with postal and currency unions, then the correct terminology would be ‘exit’. But it’s all just semantics – tomayto/tomahto, potayto/potahto – does it really matter? What Texans are really saying is this: TEXAS + EXIT = TEXIT. In short – Texans just want out!

While some people seem to believe the Texas Nationalist Movement is only about TEXIT, it really is a whole lot more than that. The TNM’s mission started in 1996 in a conscious decision by Texans to form a political and social movement. Its overall mission is “to secure and protect the political, cultural and economic independence of the nation of Texas and to restore and protect a constitutional Republic and the inherent rights of the people of Texas.” The efforts of this movement have ranged from getting legislation filed to protect the rights of the people, to suing the Texas Board of Education to stop them from removing the term “heroes” when referring to the Alamo Defenders.

It is important to note the TEXIT movement was formed because it solves so many of the issues surrounding the eroding rights of Texans. The withdrawal from the US and restoration of independence would essentially “reclaim the right of self-government from a bunch of political elites who think they know what’s best” and make Texas a “self-governing independent bastion of economic freedom and personal liberty.” And the TNM will be around long after independence is restored to ensure that Texans are never again put under the thumb of external control.

At this point, the federal government overreach is irreversible. Texans are already subjected to over 180,000 pages of federal rules, laws, and regulations – laws that were enacted by unaccountable federal bureaucrats who have no idea what Texas needs or wants. They have accumulated over $30 trillion in national debt, abdicated for Neo-Marxist indoctrination and socialism. All this power centralized in D.C. has made it “ripe for control from radicals and ideologues.” The federal government has overstepped its bounds and no longer represents the limited government laid out in the Constitution.

Although many will argue that secession is illegal, the U.S. Constitution does not forbid states from leaving the Union. Article 10 of the U.S. Constitution lists all the things states are prohibited from doing. There is no prohibition against a state leaving the union. In addition, it states in the 10th amendment, that “any powers not given to the federal government by that constitution are reserved to the people and to the states.” The Texas Constitution clearly acknowledges possibility that the Union would get out of control and makes statements regarding the need for Texas to leave in the future. Article 1 Section 1 ends with, “The perpetuity of the union depends on the right of local self-government, unimpaired to all the states,” while Article 1 Section 2 states, “All political power is inherent in the people, and all free governments are founded on their authority and instituted for their benefit. And the people have, at all times, the inalienable right to alter, reform, or abolish their form of government in such manner as they may think expedient.”

Others will try to say the Supreme Court has since ruled secession to be illegal. Daniel Miller states, “Texas v. White is garbage!” While an in-depth explanation of why it is not a valid argument can be found on the TNM website here. So the short answer is this: Salmon P. Chase should have recused himself from this case from the get-go; he contradicts himself within his own ruling; and separation of the powers of government gives the Legislative Branch absolutely no authority regarding political issues. And TEXIT is definitely a political issue!

Our fight now resembles so many of the fights from the past and the present. The American Revolution happened because the colonists were tired of being under control from Great Britain. The issues for our fight for independence from Mexico sound very familiar today. The ideological purge of the military, the attempted removal of people’s weapons, suspicion of voter fraud, and enacting edicts that go against the Constitution are all issues we are facing now. Others around the world are also fighting for their right of self-governance. BREXIT came about because of the “centralization of power in Brussels that threatens to erode the personal rights and liberties of British.” The northern Mexican states are pushing for independence from Mexico because of problems with immigration and border control. The Catalonian arguments against the Spanish central government mirror our problems so much so that one could literally cross out the proper names and put Texas and Washington, D.C. in their place.

Texas needs to be restored and protected as a Constitutional Republic, along with the inherent, inalienable rights of the people. The madness of radicals in Congress in control of our health, economy, energy, immigration, security, etc. needs to be stopped. We fought against those things then – why would we not fight against those things now? But should we really leave? How about flipping the question and asking, “Why would we join? If Texas were a self-governing independent nation right now – with the Ninth largest economy in the world, control of our own borders, energy, healthcare, laws, etc. – what would be the reasons for joining the United States?

Well…..umm….let’s see….. Not one person has ever been able to answer that question with a valid response. So, if you can’t make a case for why Texas should join, why would you ever try to make a case that we shouldn’t leave?” It is important to keep in mind that Texas overpays the federal government $103-$160 billion every year, while the U.S. has accrued over $30 Trillion in national debt. Most of the laws that are made are done so by 2 ½ million unaccountable federal bureaucrats.

All Texans want is to be allowed to keep their fundamental rights. Texans value freedom, liberty, rights, rule of law, prosperity, and opportunity. “Texans at their very core are just tired of having to wake up every day and fight for something that they were born with.”

Although there are still many questions surrounding the prospect of Texas becoming independent, we need to start talking about it formally. For Texans to even start to debate the issues or vie for voter support, it needs to be a known item for voting on the ballot in the November 2021 elections.  Unlike some other states and countries, Texas doesn’t have Citizen Initiative. No matter how many signatures we have, a petition cannot force something on the ballot. The legislative process to do this is in the hands of our legislators and their support of the bill. Representative Kyle Biedermann has begun the process by filing the Texas Independence Referendum Act (HB1359) with the House. Although some others have signed on to support the referendum, many others are needed to get it passed. We need to engage our Representatives and Senators and let them know they need to support this bill. Texans have a voice – and we want to vote!