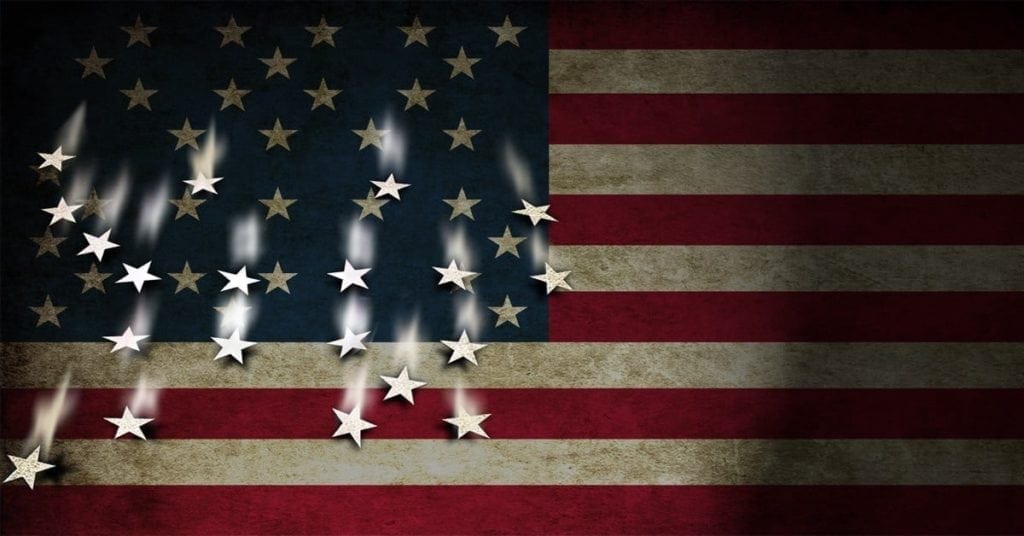 Here’s a thought experiment: Imagine for a moment that Texas is currently a self-governing, independent nation. It makes its own laws. It controls its own borders. It has its own currency. It has its own trade deals with other nations. It has full control over how, or even if, its citizens are taxed. It has full control over how that money is spent to address the challenges unique to its people. In short, you are just like the other 195 self-governing, independent nation-states in the world. You control your own destiny.

Now, imagine that the citizens of your independent, self-governing nation were asked to go to the polls and answer one question: “Should our State cease being an independent nation and become a State of the United States?”

What would the case be for you voting to give up your independence in favor of becoming a State of the Union? Let’s examine the “benefits” of joining the United States.

On “Day One” you would be subject to 180,000 – 800,000 pages of federal laws and regulations, the true number of which even the federal government cannot count. Approximately 5,000 of those laws carry criminal penalties. Be careful, though. The average American commits around 3 federal felonies per day.

This doesn’t take into account the federal regulatory accumulation that you would be subject to which has robbed everyone in the Union of 85% of their household income. Oh, I forgot to mention the $66,000 you would be liable for as your share of the $22 trillion federal debt. The upside is that this federal debt comes with a handy online scoreboard that can help you keep track of it so you always know how much you owe at any given time.

Ultimately, your fate would be in the hands of one or more of the approximately 440 separate and overlapping federal agencies. If you disagree with their actions, you could always challenge their laws, rules, and regulations in one of their courts, presided over by their judges that you had little to no say in choosing. However, the track record for success when citizens and States challenge the federal government in their own courts isn’t great.

You could always work within their system to change things, but it’ll be tough with your representatives making up a small minority in a body of 535 people, the vast majority of which do not come from your State. The upside is that you get an opportunity to vote for a President every four years, who likely will not be from your State, who can overturn your laws at the stroke of a pen with an Executive Order. All of these functionaries will work together to enforce laws on you and your State that really were crafted to benefit another State or other politicians but that you’ll be forced to obey anyway.

The great news is that you won’t have to worry about all of those pesky responsibilities that come with self-government. Nearly half of the bills that your State Legislature introduces each session will be in response to some federal law, rule, regulation, or court decision. One caveat, though: If you don’t follow the federal lead, they won’t return any of the money that you sent to them (via federal income taxes). Therefore, it’s just best to go along to get along.

With membership in the Union, you receive access to this wonderful thing called the “Bill of Rights” that outlines all of the protections of your liberty that you will have as a member. It’s been around for over 200 years and is rock solid. Pay no attention to the asterisks or the fine print. They are only there to guide the federal government on how the federal courts have interpreted each of those rights to make them mean whatever the federal government wants them to mean in a particular situation. No need to worry.

So… are you in? How you would answer this question is more important than you might think.

Over the last several decades, the world has witnessed an explosion in the number of self-governing nation-states. At the end of the Second World War, there were 54 recognized countries across the globe. At the end of the 20th century, there were 192. In each of those cases, the people demanding their independence were subjected to unreasonable and irrational scrutiny of their desire to be politically, culturally, and economically independent. This scrutiny often came from their fellow countrymen whose opposition was rooted in and motivated by fear.

The unfortunate thing about fear is that it is paralyzing. Fear causes people, especially so in the case of major political questions, to make terrible decisions. It causes them to embrace a hated status quo rather than imagine the potential for a positive future. It can, if wielded by would-be tyrants, rob an entire people of their self-confidence and reduce them to a status of willful dependence. It is the political version of Stockholm Syndrome.

Thinking about independence in this way may help you and the people of your State reject fear and embrace self-government outside the context of the federal union. For a freedom-loving people who believe in individual liberty and limited government, fixing the federal government and supporting those who promise to do so, is no longer an option.

Having this discussion right now is a matter of survival. If history has taught us anything, it’s that there is no such thing as the status quo. Much like Newton’s Laws of Motion, tyranny in motion tends to stay in motion unless acted upon by an outside force. In this instance, it is the force of a people who are no longer content to be deprived of the right of self-government. If you would not vote to join the United States, why not vote for independence?