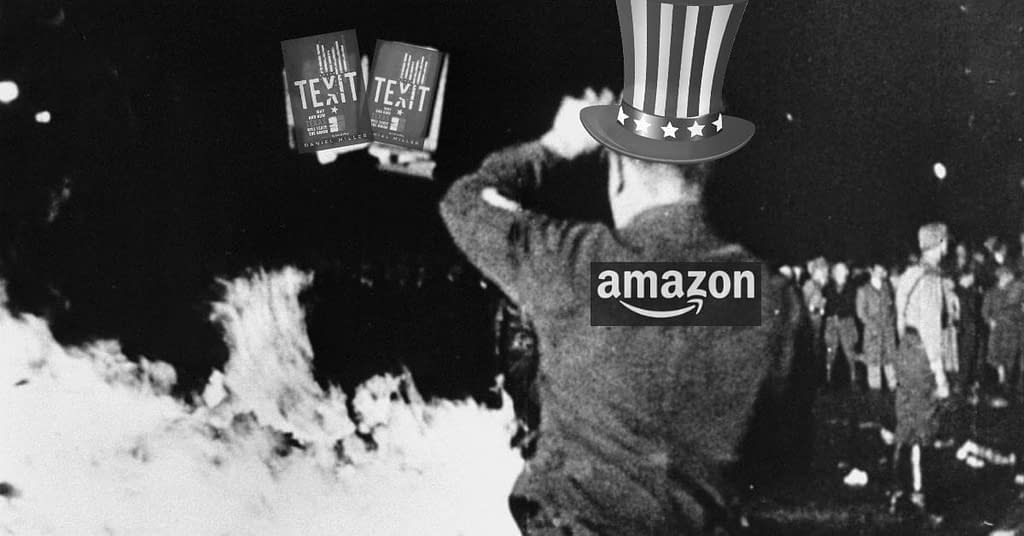 Amazon, the world’s largest and most influential book-sellers, finally decided to discontinue sales of TEXIT: Why and How Texas Will Leave The Union, effectively banning the book from their platform. In a blatant disregard for any potential blowback, they chose Banned Books Week to take action.

For some weeks, Amazon has been singling out TEXIT: Why and How Texas Will Leave The Union by Daniel Miller for some special attention. No, it wasn’t because they wanted to boost this already very successful book that topped 3 of their best sellers lists and received 100% in 5-star reviews on their site. The sort of attention they were giving the Texit was the negative kind. Inexplicably, they dropped the price to around wholesale cost and only made it available to Amazon Prime members. This was clearly done to drive down sales of the book and make the book unprofitable for other retailers for what could only be described as political reasons. (You can read the full story here.) However, after a few weeks of the publisher, Defiance Press, protesting the move and even looking into legal recourse, Amazon decided to pull sales of the hardcover edition of Texit, altogether.

The fact that Amazon banned Texit from their platform during #BannedBooksWeek was the media giant’s Freudian way of telling all of us what they’re about. While Banned Books Week is more focused on certain titles being cleansed from the public sphere by government, increasingly, the corporate cabal that seeks to impose doctrinal orthodoxy on us by using their monopolist status to unofficially deny people the “freedom to seek and to express ideas, even those some consider unorthodox or unpopular,” can be in some ways more insidious than when the government does it. At least with government, you have recourse by invoking the basic right to free speech. With the giant corporations, however, when they decide to crush an idea, there’s very little that citizens of modest means can do to stop them.

Thanks to Amazon, this week Texit has been given the honor of joining such titles as The Adventures of Huckleberry Finn, All the King’s Men, Animal Farm, Brave New World, The Color Purple, Fahrenheit 451, and The Holy Bible in being censored for offering a different take on the world from the one the established powers would prefer we would believe in.

The author and President of the Texas Nationalist Movement, Daniel Miller, has this to say on the matter.

“There is something clearly important about the message in TEXIT that is driving Amazon, Facebook, Twitter, and other platforms to take such brash and extraordinary measures to prevent people from reading it or even learning about it.  Therefore, if these platforms will not operate as neutral public forums or broad marketplaces as they advertise, then the information contained in the book will have to be taken directly to the people.”

You can pick up a copy TEXIT: Why and How Texas Will Leave The Union directly from the TNM at tnm.me/texitbook and everyone is encouraged to share this link via email and social media.