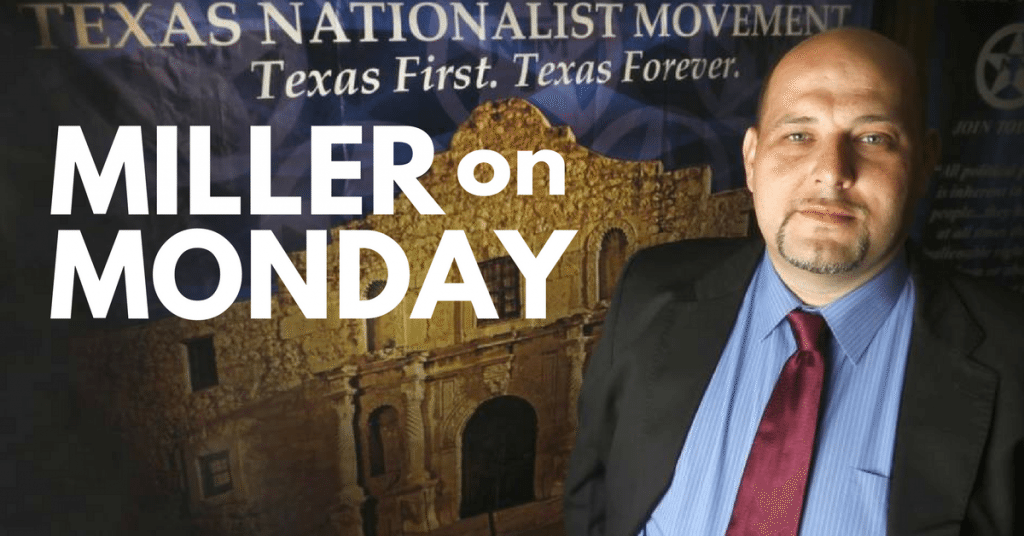 Since my last Miller on Monday, we’ve had a catastrophic storm, a secession crisis in Catalonia, a threat to the integrity of the Alamo, and much more. In the midst of all of this, I have been working on finishing the new book. Frankly, sometimes being at the forefront of Texas independence feels like trying to take a drink from a fire hose.

Rather than trying to break out one single piece of this news, I’d like to offer some short thoughts on all of it.

Hurricane Harvey will likely be remembered as the worst natural disaster in Texas in recent history. Harvey directly affected almost 11 million Texans including the TNM and, personally, our family. In the city where we live, the most recent report records that over 60 inches of rain fell. While we escaped with minimal damage, our hearts go out to the communities up and down the Texas coast who have suffered greatly.

However, I believe that Harvey will eventually be known for something else. It will go down as a defining moment when Texans showed the world who we are. When Harvey made landfall, Texans engaged to help other Texans. And they are still helping because Texans are still suffering. From Rockport to Orange there are many who lost everything and are now trying to put their lives back together.

The TNM caught a tremendous amount of grief for calling out FEMA and the Red Cross in the aftermath of the storm. Honestly, I couldn’t possibly care less about the hate mail that we received. We spoke up for Texans who felt like they were being ignored and I will never apologize for that. Because of what we have personally experienced in regard to the FEMA and Red Cross response, I feel perfectly justified in saying that both of those bureaucratic monstrosities can go rot. There has been an outpouring of aid, support, and love from private organizations, churches and religious groups, and individuals and companies that continues to this day.

I also stand behind the assertion that if Texas were not in the union and kept that $100 billion annual over-payment into the Federal system, Texas would be better prepared to handle natural disasters. When the largest grocery chain in Texas is better prepared for natural disasters than the Federal Government and its instrumentality, Texans are right to ask exactly what in the hell we are paying Federal taxes for. Anyone who believes otherwise is bad at math and doesn’t truly understand the spirit and will of Texans.

Many who are not directly involved in the day-to-day fight for Texas independence likely will not understand the bond that develops between independence movements around the world. We may be different people with different sets of grievances and aspirations, but there is a kinship that is hard to explain unless you live it. This is true when it comes to our bond with Catalonia.

When the news broke that the Catalans were going to press forward with their referendum on independence from Spain, I was overjoyed. I have said many times over the years that out of all of the other independence movements around the world, the Catalan grievances with the central government in Spain were so similar to the grievances that Texas has with the central government in Washington, that all one had to do is change the nouns to make them indistinguishable.

However, in the days running up to the referendum the Spanish government abandoned the principle of self-government and self-determination. Their Prime Minister, Mariano Rajoy, took the Spanish people back to the days of the fascist dictator Francisco Franco and began a brutal repression of the Catalans to prevent them from even holding a referendum. His violent reaction saw Catalan political leaders and public officials thrown into jail, ballot papers and ballot boxes seized, and the imposition of a new Spanish Inquisition as internet domains were seized, websites shut down, and immoral searches conducted on citizens.

President Trump even put his seal of approval on these actions by publicly scolding the Catalan referendum, offering moral support to Rajoy’s actions, and turning his back on the fundamental right of self-determination.

Even in the face of persecution and repression, over 2.5 million Catalans voted in the referendum with nearly 1,000 of them being injured by the Spanish police. If any Catalans were on the fence about their independence before, Rajoy did everything in his power to prove that Madrid is no friend to the Catalan people. The videos circulating around social media were reminiscent of the Jim Crow era and sickened me. Yet there they stood. Catalans still turned out to vote for their independence. At the risk of imprisonment or death, they still showed up.

Their tenacity and determination is inspirational while, at the same, time a stunning indictment. When I see these scenes play out in the media, I often wonder how Texans would react in a similar circumstance. How would Texans react to persecution in the exercise of their right of self-determination? I want to believe that the Texans of today are cut from the same cloth as those who hoisted the “Come and Take It” flag or who stood with Travis at the fall of the Alamo.

I must confess that I worry about how easily distracted Texans are these days. When Texans are more concerned with a ridiculous protest by overpaid athletes than they are the Federal noose that is tightening around our necks, we should all be concerned. Rather than burning the overpriced jersey from their favorite NFL team, Texans should be burning mad that Texas is still part of a union that robs them of their rights, their money, their dignity, and their right of self government.

Many of you know that the TNM has been very active in the efforts to derail the plans to “Reimagine The Alamo” for years now. We fought against the UNESCO World Heritage designation when no one else would stand beside us. Even some supporters of the TNM told us that our fears were unjustified and a few even accused us of lying about the entire issue.

I seriously doubt that I will see any offers of an apology arrive in my email, but I’ll have fun imagining them. It’s all coming to pass just as we predicted.

The good news is that we have been working with other leaders in the grassroots movement for several months now to develop and implement a strategy to bring the Alamo issue to light and mount a successful defense of the “Shrine of Texas Liberty”. I can honestly say that it has been a pure joy to work with these leaders and to fight this fight alongside them.

In addition, we have recently connected with the Alamo Defenders Descendants Association and other organizations which has further expanded the connections of those working to defend the Alamo.

We have a really good shot at stopping this desecration of the Alamo dead in its tracks. Working together we can beat the political class who want to change the narrative of the Alamo and pervert its meaning to Texans. If you are not engaged in this fight, now is the time.

Buried in the middle of the devastation of Hurricane Harvey was an announcement that I had signed a deal with Defiance Press to publish a new book on Texit. I didn’t talk much about it then because, frankly, Texans had way more important issues to deal with at the time than my book. Nevertheless, it’s coming and I am deep in finishing it up. Line In The Sand took 12 days to write. This is taking considerably longer.

It will be an in-depth exploration of Texit and the issues surrounding Texas independence and will, in my opinion, be a definitive guide on the subject. It answers the most commonly held objections and does a deep dive on some independence-related subjects that have not been extensively discussed.

Many will be surprised at the care that is given to explaining the ideal independence referendum, the transitional process from a State of the United States to an independent republic, and the exploration of what post-independence policy may look like in an independent Texas. As much as I have studied this issue over 20 years, I can honestly say that some of what is going into the book has come a surprise to me. Texit supporters will be enraged at the Federal Government, proud to be Texans, and hopeful that Texit will not be as difficult as some make it out to be.

Over the past several weeks I’ve had time to reflect. Being deeply engaged in writing the apologetics of Texas independence while bearing witness to these events that directly stoke the spirit of our cause, has strengthened my personal resolve. I have strengthened my respect and love for the tenacious while my distaste for those who are weak of character, commitment, and spirit has grown from moderate to extreme. Watching our neighbors suffer loss has broken my heart, but watching our neighbors respond to that loss has given me a renewed sense of hope. Watching our friends in Catalonia overcome all obstacles to exercise their right of self-determination has strengthened my personal commitment and decreased my tolerance for whining and complaining.

Just like every Texan should be, I am affected by it all. And it has made me more determined than ever to see Texas as a free and independent nation.