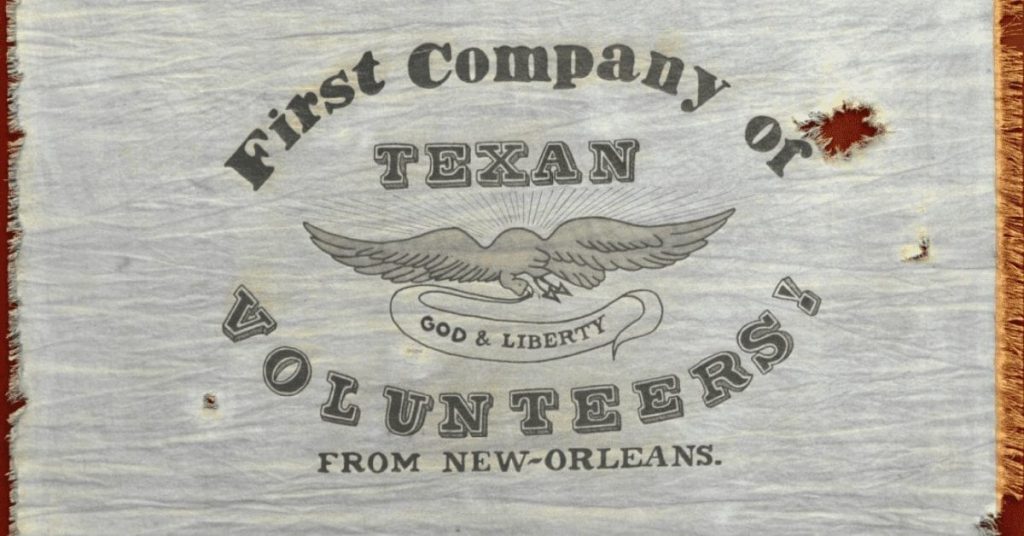 The Texas Nationalist Movement is preparing for a lawsuit against Mexico for the return of artifacts returned to Mexico City during the Texas Revolution.

“It has been known for some time that the Mexican government is in possession of the true Alamo flag and many other artifacts captured during their invasion of Texas and we want them back,” TNM president Daniel Miller said. “We are going to initiate the suit in federal court and will appeal to the International Court of Justice in The Hague if necessary.”

The move is part of a longer-sought exchange of artifacts recovered by each side during the Texas Revolution of 1835-36.

An article in the Texas Observer relates the tale of a 1998 expedition by Texas officials to Mexico City, seeking to recover the flag of the First Company of Texan Volunteers from New Orleans, dubbed the “New Orleans Greys” because of their distinctive uniforms.

The two companies of riflemen were welcomed by the settlers of East Texas, who gifted them with, according to a Texas Observer article by Lucius Lomax, “…a flag, made of blue silk, about the size of a bath towel, bordered by white fringe. The silk featured the likeness of an eagle, wings spread, and below the eagle the words, ‘First Company of Texan Volunteers from New Orleans.’”

The flag was captured at the Alamo and returned to Mexico City as war booty. In the years since its re-discovery in the archives of the National Museum of History at Chapultapec Castle, several different administrations in both Austin and in Washington have sought its return. At one point, former Texas Gov. George W. Bush’s administration offered to trade a number of artifacts captured by Gen. Sam Houston’s victorious army at the Battle of San Jacinto for the flag – but every effort has met with suspicion and disinterest by the Mexican government.

“Mexico has a history at thumbing their nose at Texas, as much as our own Federal Government,” Miller said. “This is proof that the TNM is as concerned with tyranny across the Rio Grand River as we are the Red River. This is about accountability to the Texan people.”

Miller added that this is the first in a series of planned actions to turn back the tide of encroachment from Washington, D.C. and Mexico City.

Lomax’s article concludes: “Probably one day the remains of the Alamo flag will make the long trip back across the Rio Grande. But before an exchange can take place two changes in consciousness will have to take place: the Mexicans will have to come to terms with what they did, and failed to do, during their time as sovereigns north of the river. (They will, in short, have to get over the loss of their northern territories.)”

The Texas Nationalist Movement is a grass-roots political organization unaffiliated with any political party which exists to secure and protect the political, cultural and economic independence of the nation of Texas and to restore and protect a constitutional Republic and the inherent rights of the people of Texas.