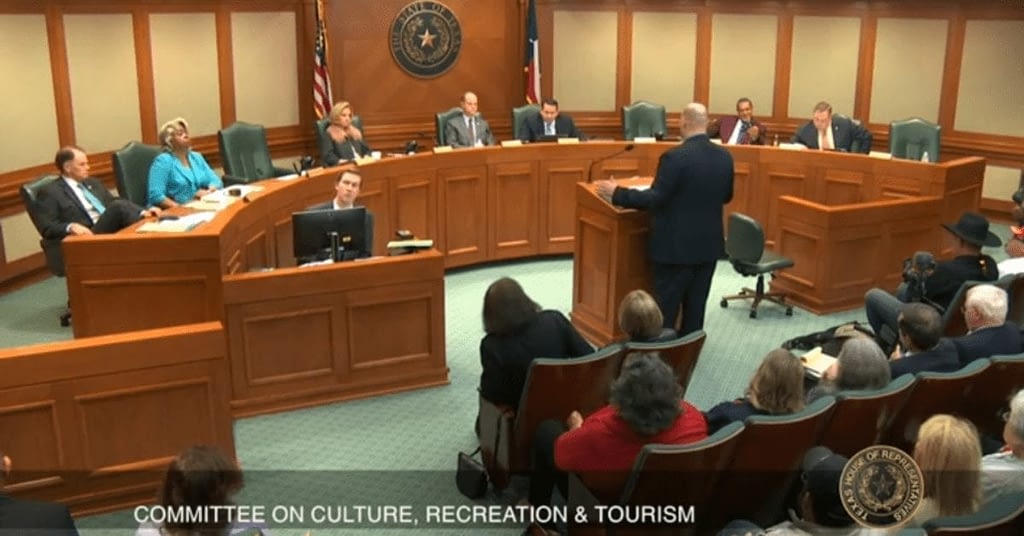 This past week finally saw a legislative hearing over HB 1836, the bill to prevent the movement of the Cenotaph from Alamo Plaza. However, the battle to preserve the Alamo and its Cenotaph has only reached the end of the beginning.

At the capitol building in Austin, the bill was first made open for testimony on Wednesday in front of the Committee on Culture, Recreation & Tourism. The bill would prevent San Antonio from undertaking further independent and unaccountable actions in this matter while the legislature is out of session, giving time to develop a more permanent solution for protecting and preserving the Alamo Cenotaph.

The Texas Nationalist Movement was well represented with many members and supporters registering their support for the bill. Among the many that testified for the bill were TNM San Patricio/Nueces County Coordinator Donna McClure, TNM President Daniel Miller, and the bill’s author Representative Kyle Biedermann. During McClure’s testimony, she tried to re-focus the issue. “This is not a partisan issue. This is a Texas issue… this is a position of the heart of the people of Texas.”

During Representative Biedermann’s testimony, he reminded the committee that it would be truly “a shame” if the monument to the seminal event in Texas history didn’t deserve a pause for consideration before irrevocable changes were made. Also, he took some time to eviscerate the arguments of some of the “con” testimony given that day, addressing one point in particular, that the Cenotaph’s movement would bring greater reverence. “[It’s] hard to believe that we would have more reverence for our defenders by moving them 500 feet away into the free speech area.” Additionally, the representative shed light on the Alamo project’s deceitful statistical practices when trying to claim the people support moving the Cenotaph, as their poll-question buried the movement consideration beneath a multitude of other points that effectively no one disagrees with. “This legislative session is going to go down in history,” said Biedermann, “as to how each one of us in the legislature decides what to do with our defenders and with the monument to our defenders and what happens at the Alamo.”

By far, the most dramatic portion of the event happened when Houston-area representative Jarvis Johnson asked the testifying Biedermann if he would like an “unlikely supporter” to his bill, to great applause. However, Johnson admonished the audience, “No, no, no! Be careful!” He then asked Biedermann if he supported adding to the Cenotaph the names of slaves killed defending the Alamo, to which Biedermann answered hardily in the affirmative. Then, after trying to put Biedermann on the spot as to whether he knew the names of the slaves in question, Johnson said that he just wanted the “entire story” told, that “it was a battle to ensure the independence of Texas, the independence for Texans to own slaves. So, let’s make sure we keep that story going too.” This comment was greeted with noticeable groans from the audience, and for good reason.

No one denies that the Republic of Texas wrongly made slavery legal, nor advocates that this fact should be white-washed from history. The defenders all had their own various sins and idiosyncrasies that might not fit the present time. What the Cenotaph celebrates and honors is not some of the defender’s bad deeds and positions, neither their previous good deeds, but the fact that these imperfect people, for one pivotal point in Texas history, stood together against the tyranny of one man that fought to make ALL Texans slaves, paying the ultimate price for their courage. This is true for both Tejano and Texian, slave and free. Johnson’s stunt was inappropriate in the context of preserving the Alamo Cenotaph, and highlighted the true preferred Alamo narrative of Johnson and the Alamo planning committees.

Despite the last-minute dramatics, the chatter is that HB1836 will be forwarded by the committee. TNM has learned that passage of HB1836 is not guaranteed. Please continue calling each member of the committee to tell them where you stand on honoring the Alamo defenders. The defenders made their stand, now its time we made ours.

Join 393,175 Texans who have registered their support for the TNM. 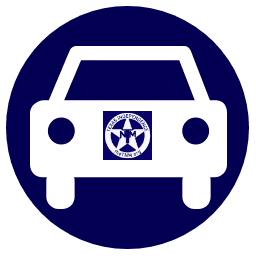 Put A TNM Sticker On Your Car

Join 393,175 Texans who have registered their support for the TNM.