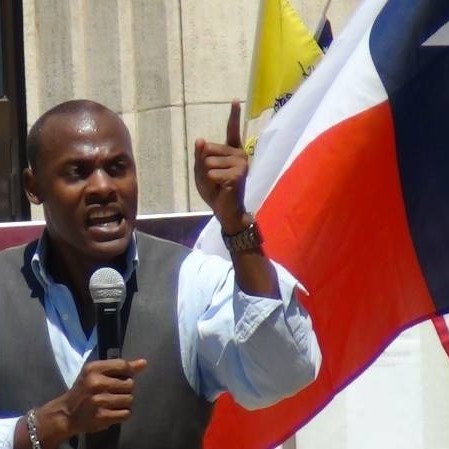 Apostle Claver T. Kamau-Imani is the president & CEO of RagingElephantsRadio.com, a digital media company founded in 2013.

Claver has lived in House District 138 since 1997 and is a 5th generation Texan. Claver and the former Barbara McDonald were married on August 31, 2019. Together they are raising her beautiful daughter Jasmine. Claver and Barbara are proud to be new homeschoolers.

The precursor to RER was Claver’s RagingElephants.org. The primary mission was to grow the conservative voting base through racial diversity – to challenge voters of color to vote their conservative, Judeo-Christian values. It was created to be an advocate of conservative-libertarian social, economic and political issues, to influence office holders, and to educate and organize the electorate.

RagingElephants.org was a counterweight to liberal organizations like MoveOn, Emily’s List, and Organizing for America. After initially establishing a multi-state operational footprint in Texas, Missouri, Kansas, Ohio, Maryland, California, Rhode Island, and other states, RagingElephants.org decided to focus all of its efforts and resources solely in Texas.

Claver was the founder and former senior pastor of the Corinthian Christian Empowerment Center (CCEC) in Houston, Texas.

CCEC’s primary ministry was urban missionary work and assisted living. As Christian community, CCEC housed the homeless, the addicted, those escaping the sex industry, those recently released from incarceration, and the mildly mentally ill. CCEC also established a hospice for the poor where they were cared for, loved, and possibly expire in an atmosphere of dignity.

Claver grew up in Beaumont, Texas within a home of politics and civil rights. Both of his parents were active leaders in Democratic Party politics, the civil rights movement, and the Missionary Baptist Church. His first assignment in political activism was at nine years old when his parents instructed him on how to do voter registration in the housing projects of Beaumont after Sunday church service. Claver has been a political activist for over 40 years.

Claver earned a Bachelor of Science degree in Communications from Lamar University.

I didn't plan on running for this office, or any other public office in my lifetime. When this seat was announced as open with the retirement of the incumbent, I received numerous calls from friends and political allies to run for the HD138 seat.

After seeking the counsel of over 50 friends, political allies, and family, I was persuaded to indeed seek this office, and try work my hardest for victory. In fact, Texas Right to Life asked me to run for the seat and endorsed my candidacy before I officially announced.

I immediately turned my attention to advocating for the advancement of the Texas GOP Platform, with a special focus on the legislative priorities.

If elected and sworn into office, my work will be single-minded: to advance the principles of life, liberty, and prosperity for all Texans.

If I am elected an sworn into office, for perhaps the first in the history of the Texas Nationalist Movement there will be a true believer serving in the Texas Legislature.

My election means the guaranteed filing of legislation for the people of Texas to have a binding referendum election on the issue of returning to the status of an independent nation.