How much support is there for TEXIT?

In 2009, Research 2000 conducted a poll of Texans and asked them this question: “Do you think Texas would be better off as an independent nation or as part of the United States of America?”

The results were trumpeted to the media and parroted by numerous media outlets. “Only 35% of the 600 Texans surveyed believed that Texas would be better off as an independent nation.” However, the left-leaning Burnt Orange Report did something that most media outlets did not. They looked at the actual results and caught something that no other outlet bothered to check.

“The Research 2000 Texas Poll was conducted from April 20 through April 22, 2009. A total of 600 likely voters who vote regularly in state elections were interviewed statewide by telephone. The poll was 39% Republican, 33% Democrat, and 28% independent.”

Looking at the breakdown by political affiliation changed the landscape. 48 percent of Republicans, 40 percent of independent voters, and 15 percent of Democrats believed that Texans would benefit from independence. The numerical breakdown matters, especially in a state where Republicans have a lock on every statewide office and where independents claim their electoral independence but typically vote for Republican candidates.

The percentages broken down by political affiliation weren’t the only earth-shattering information in the poll. Also buried in that statement was the real key to unlocking the real impact of the survey. The respondents were likely voters who also regularly vote.

However, one poll does not make a trend. In 2014, a Reuters/IPSOS poll asked a slightly different question. Rather than asking a question about whether Texans felt they would be better off under the flag of independence, respondents were asked if they felt Texas should leave the Union. The difference between the two questions is very important. The Research 2000 poll was a question about perceived benefit. The Reuters/IPSOS question was a question of political will. The results, again broken down by political affiliation, showed 54 percent of Republicans, 49 percent of independent voters, and 35 percent of Democrats favored an independent Texas.

While the political trend obvious in these two polls is the growth of support for Texit and the strengthening of the attitudes of the voters, what goes virtually unnoticed by pundits is what these numbers look like in reality. When these percentages are overlaid with the actual voting patterns of Texans in statewide races, support for Texit, on average, polls anywhere from 6 to 10 percentage points higher than those who want to stay in the Union.

In addition, the depth and diversity of Texans in favor of independence would be the dream of a politician. The support of a majority of Republicans, nearly half of independents, and a substantial percentage of Democrats is enough to get anyone elected in Texas at any level. In short, if Texit were a political candidate, it could get elected to any statewide elected office.

However, those are just polls that ask simple binary questions with no consequence and no mechanism to measure the commitment of the respondent to Texit. And polls, as was shown in the 2016 U.S. presidential election cycle, can be deceiving. To get an idea of how Texit stacks up in the real world, and to get a better sense of the level of commitment of the supporters, one need only compare the leading organizational proponent of Texit, the TNM, to other major political advocacy organizations by measuring their membership or declared support numbers as a percentage of registered voters in the geographic areas they serve.

Among Texas-focused organizations, the powerful political action committee, Texans For Lawsuit Reform, only represented 0.11 percent of the registered voters in Texas with the current favorite cause of Governor Greg Abbott, the Texas branch of the Convention of States Project boasting dismal support of only 0.61 percent of Texas voters.

In comparison with all these organizations that are considered mainstream, the TNM has the declared support of 2.31 percent of Texas voters. Even in the seemingly more relevant 21st-century political battleground, social media, it has a larger social media following across all platforms than the Texas Republican and Democratic Parties combined. 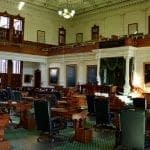 What will it take to win a TEXIT vote?

Leading up to the passage of the referendum bill and through to the actual vote,

Do we have legislation ready to file for a TEXIT vote?

Yes. Amazingly, the legislation required to initiate a Texit referendum is incredibly simple when contemplating